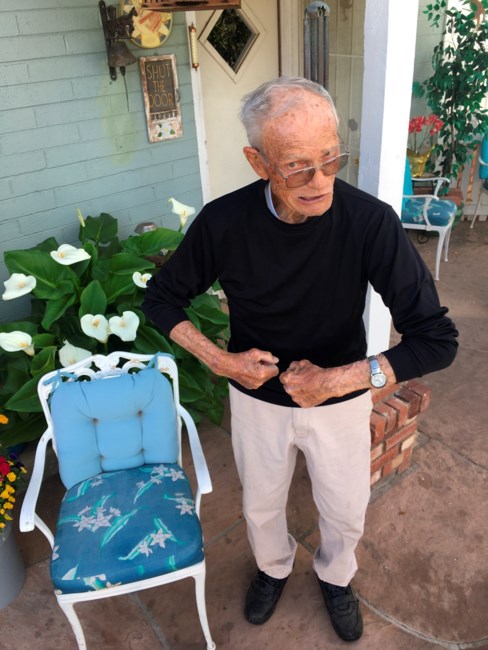 Pete Gorraiz was born to Basque immigrants in Glendale, Arizona on February 4th, 1931. Growing up on a dairy farm had its daily chores before and after classes at Cartwright Elementary School.

Pete was voted Harvest King his junior year and won again, a year later the prestigious Cardinal King award at Glendale High by the student body.

As a college student, he participated in a few team sports at Phoenix College while his studies focused on a degree in Business Administration. Here, he ran hurdles for the college and transferred to Grand Canyon College the following year. There, he played on the Basketball team and started for the Inaugural Baseball team. Here, he had the first base hit in Antelope history, the records say and it was the only hit. At Grand Canyon College, he met his love, Bertha Louise Scott, and lived a romance that would span nearly 70 years.

The Korean War drafted him to a stateside post in California where he was basically a Radar O’Rielly with the same rank and job duties.

His military service complete, and the rest of his education done, he and Bertha Louise started a family in Central Phoenix while Pete began a teaching career for Squaw Peak Elementary School. His 34 years as a 6th and7th grade teacher, (1958-1992) was that of Language Arts, Social Studies, and a little Spanish. Also, he established a chapter of the National Junior Honor Society (NJHS) at three different schools. At Squaw Peak, he coached softball, track, and volleyball and during the summer played in fast pitch softball leagues and the church league. He could pitch, play infield or, out.

Growing up, he taught his kids sports, hunting and fishing. Pete would take the family to White Horse Lake in the summers and hunting trips in the Winter.

Pete supplemented his income working after school and during the summer months as a carpenter. He built, among other things, driveways, patios, room additions, and walls, masonry and even painted. In retirement, Pete donated time to Grand Canyon College, Grand Canyon University, and his longtime church Eastside Baptist. His last gift to the church was to rebuild the pulpit, the one used today. In one case for GCU he donated 240 hours of time to build the antelope monument that still stands at the GCU entrance. He was a member of the GCU Guild and volunteered at tailgate dinners, on the grounds, before Antelope Basketball, and as a greeter.

Pete was inducted into the Grand Canyon University Hall of Fame from the school of Business Administration in March of 2020.

Pete hunted and fished with his family, well into retirement and enjoyed trips on cruises and time in Las Vegas.

After he reached 70, he picked up acrylic painting and his Southwest landscape style was a cross between Impressionism and Folk Art, all country scenes. He painted until the last few weeks of his life and completed some 75 works of art. On several pieces, he painted on the edges of the canvas while on others, he made the frame too. He signed the backs of the paintings with a personal note, recipient’s name, and his own age. Pete died on November 12th, and is preceded by his parents Higinio Gorraiz and Josepha Weustermann; siblings: Rufino and Angel Hualde and Dora (nee: Gorraiz) and his wife Bertha Louise Scott Gorraiz. He is survived by his half sister Elsa Baker, his children Pete, Joe, Pat, Ann and Rhonda Gorraiz and Kathy Neville, 12 grandchildren, 9 great-grandchildren.

Please visit our website at www.ALMoore-Grimshaw.com to leave memories and tributes.