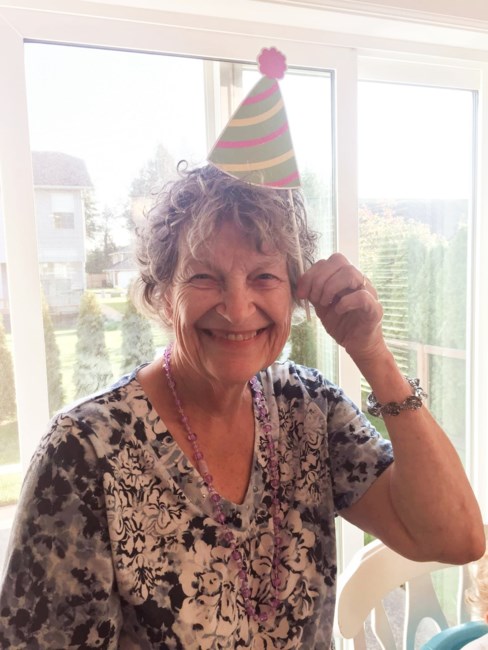 CHRISTINA HUNTER Christina Hunter, 78, wife of Robert Hunter, passed away peacefully on July 28, 2022 in Port Moody, BC Canada. Christina was born on July 11, 1944 to Maurice Waddington and Irene (Pickles) Waddington. She grew up in Fleetwood, Lancashire, England and developed interests in reading, cooking, gardening, and crafting. She went on to work at her father’s commercial nursery in her teens until she was married in 1964. Robert and Christina were married for 58 years. She met Robert at a dancehall in Southport, where they continued to meet each weekend for months, despite living miles apart in different villages. He made her laugh, had learned a respected trade, and more importantly owned a car. Or at least his brother did. Soon they were inseparable. They immigrated to Canada in 1968, initially settling in Winnipeg Manitoba, but moved to Abbotsford, British Columbia in 1994 where she remained until 2022. Christina was a work-at-home mother who was actively involved in in her church, enjoyed crafting with friends, and always put her family first. Her love of finding thrift store bargains, trying new recipes, and service to others helped her build strong friendships, some of which have lasted over 50 years. She will always be remembered for her beautiful smile, and her calm encouraging words. In her retirement years she continued to collect cookbooks, work part time house cleaning, and spent hours in her garden tending to the plants she loved. She remained active, walking in the neighborhood, and working on jigsaw puzzles right up to her final days. Christina is survived by her husband Robert, her son Neil and his three children: Derek, Mitchell and Brooke; Her son Russell and his two children: Calista and Daniel; her son Steven and his three children: Owen, Addien and Keely; her daughter Selina and her two children: Tessa and Griffin; her Daughters-in-Law; Candice, Jo Lynn, and Lisa; her son-in-law Scott; and three great-grandchildren: Aurora, Serenity, and Vera. She will be forever loved and missed. In lieu of flowers, the family invites you to consider making a donation to the Crossroads Hospice Society who took such good care of Christina in her final two weeks. https://crossroadshospice.org/pages/donate A service will be held for Christina Saturday, August 13, 2022 from 11:00 AM to 12:00 PM with a reception to follow at First Memorial Funeral Services Burkeview Chapel, 1340 Dominion Ave, Port Coquitlam, BC V3B8G7. Fond memories and expressions of sympathy may be shared at www.firstmemorialportcoquitlam.com for the HUNTER family.
VER MÁS VER MENOS