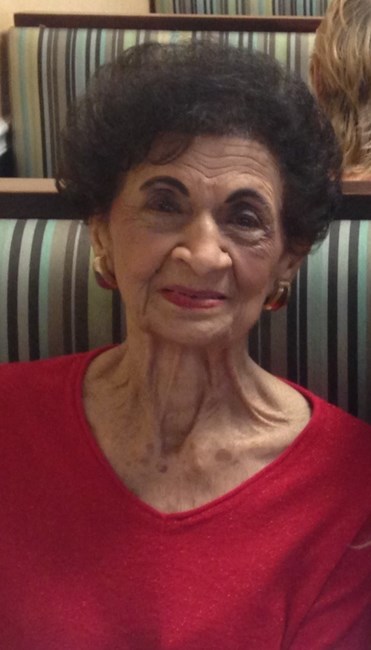 Mary (Tsalichis) Manuel passed away peacefully on September 25, 2022 at Brickmont Assisted Living in Roswell, Georgia. Mary was born February 25, 1930 the middle of three children to Bill and Margaret Tsalichis in Tarpon Springs, Florida and raised at 52 Ada Street. She went to Tarpon Springs Elementary and graduated from Tarpon Springs High School in 1948 where she was a cheerleader. After graduation, she went to work at Baynard Drug Store. She married John Manuel Jr. on July 29,1951 at St. Nicholas Greek Orthodox Cathedral in Tarpon Springs, Florida. John and his father owned the 301 Restaurant in Sylvania, Georgia. This is where she first learned the restaurant business. Johnny (John Manuel III) (Angie) was born in Augusta, Georgia on February 19, 1958 and Billy (Basil) Manuel (Michelle) was born there also on July 11,1961. In 1968 they moved to Charleston, South Carolina semi-retired. In 1969 they decided to get into the retail liquor business and opened Manuel's Wine and Liquor which became the 4th largest volume store in the state of South Carolina in 1976. John Manuel Jr. passed away on August 10, 1978. Mary then opened Mary Manuel's Deli in 1980 and later decided to move back to her beloved hometown of Tarpon Springs in 1990 where she worked part-time for 29 years in gift shops on the Tarpon Springs Sponge Docks. She relocated to Atlanta in 2019 to be near Billy and Michelle. In addition to her parents, she is predeceased by her sister, Goldie Smirlis, and her brother, Nick Tsalichis. She was the rock of the family and proud of her two grandsons, Nicholas (Katelyn) Manuel and Logan (Samantha) Manuel. Mary is survived by many loving nieces and nephews. Mary was very passionate about her Greek heritage, all things Tarpon Springs, Greek food and especially Greek dancing. She always enjoyed fashion and wearing her jewelry. She spent her life helping people and was a very compassionate person. A private service of remembrance will be at Holy Trinity Greek Orthodox church in Augusta, Georgia on October 4. In lieu of flowers, donations can be made to St. Nicholas Greek Orthodox Cathedral 36 North Pinellas Avenue, Tarpon Springs, Florida 34689.
VER MÁS VER MENOS