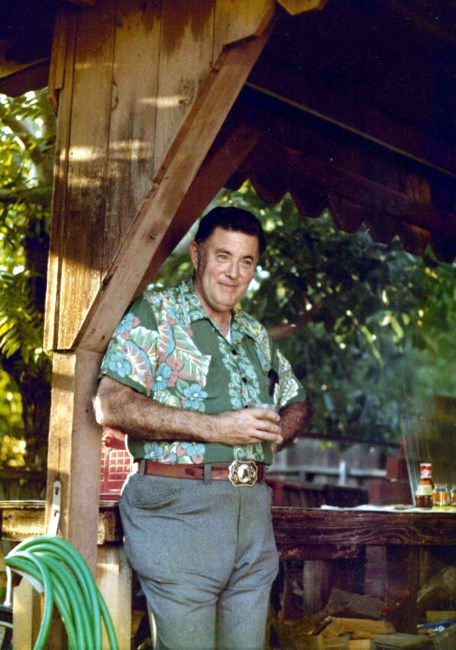 Clarence Edwin Fagalde, Jr., 97, died Aug. 21 in San Jose. A native San Josean, he grew up picking prunes and cherries on the Dorrance Ranch on Dry Creek Road. To the end, he enjoyed telling stories of the days when orchards filled Santa Clara Valley, when he could ride a horse from his grandparents’ home on Branham Lane to the ranch. He was born May 1, 1922. Son of Clarence Edward Fagalde and Clara Fagalde, brother of Donald, Ed, as he was known, graduated from Campbell Elementary and Campbell High School. He served in the Army Air Corps during WWII as an airplane mechanic, stationed in the Philippines, Australia, and other sites in the Pacific. While overseas, he survived dengue fever and a plane crash on the island of Leyte. When Ed returned from the war, his father had a new tractor and lots of work waiting for him. He was glad to be back on the ranch, but soon developed other interests. He became an electrician and was a proud member of the International Brotherhood of Electrical Workers #332 for more than 60 years. A few years after the war, he met Elaine Avina at a dance. The bandleader, Tony Passarelli, predicted that he would play at their wedding. And he did. They were married in 1949 and welcomed two children, Susan and Michael. Ed loved to fish, was an avid CB radio operator (KNA 5057, Twin Pines), and enjoyed camping at Half Moon Bay. After his retirement, he and Elaine traveled all over the western United States. Ed had more lives than a cat. Widowed in 2002, he survived heart surgery, a broken hip, a shattered leg, and other injuries, always returning to independent life in the home where he had lived since 1950. Finally it was time to go on to new adventures in the next life. Ed is survived by his children, Susan Fagalde Lick of South Beach, Oregon, his son Michael and daughter-in-law Sharon of Catheys Valley, California, grandchildren Susan and William, and great-grandchildren Riley, Bobby and Becca, sister-in-law Suzanne Avina, and many nieces, nephews and cousins. A funeral Mass will be held Friday, Sept. 13 at 10:30 a.m. at St. Martin of Tours Church, 200 O’Connor Dr. San Jose. In lieu of flowers, the family requests donations to the American Heart Association, https://heart.org, or the Cancer Society of America, www.cancer.org.
VER MÁS VER MENOS