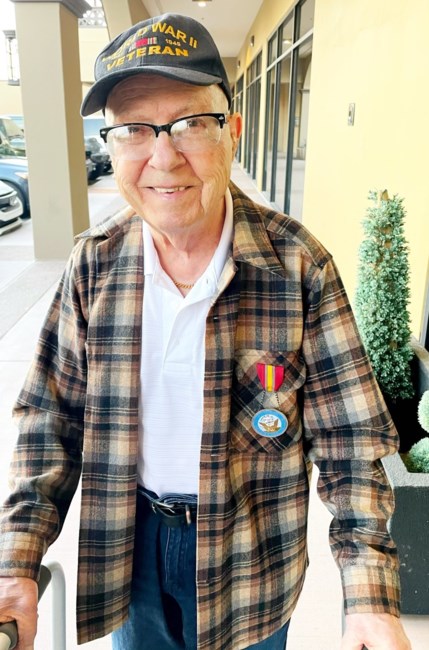 Peter Edward Pasini was born in Milmay, New Jersey on November 26, 1926. He grew up in Ozone Park, New York, where he attended vocational high school and worked as an apprentice machinist in the Brooklyn Navy yard. Pete joined the US Army in 1943 and was stationed in the Philippines. After the war, Pete worked in the insurance business, During this time he met the love of his life Theresa Perretta and they were married in April of 1945. Pete became a machinist at Grumman Aircraft and attended Hofstra University. He and Terry then moved to California where Pete worked at Lockheed as an aerospace manufacturing engineer on many significant projects, including the NASA Rockwell International Enterprise space shuttle. He was a member of Knights of Columbus, Italian Men's Club, Elks Lodge, and Young Men's Institute. Pete enjoyed travelling the world with his wife, gatherings with his extended family, and sailing on the Bay. Pete is predeceased by his son Robert and is survived by his loving wife Theresa, daughter, Dorothy (William) Petro, grandchildren Michelle (Ben) Gerster, Stephanie Petro, Jessica (Mike) DeFranco and great grandchildren Jordyn, Emma, Eleanor, Everett and Penelope. He will be missed by countless other friends and family whom were blessed to know him.
VER MÁS VER MENOS

Luncheon for immediate and extended family