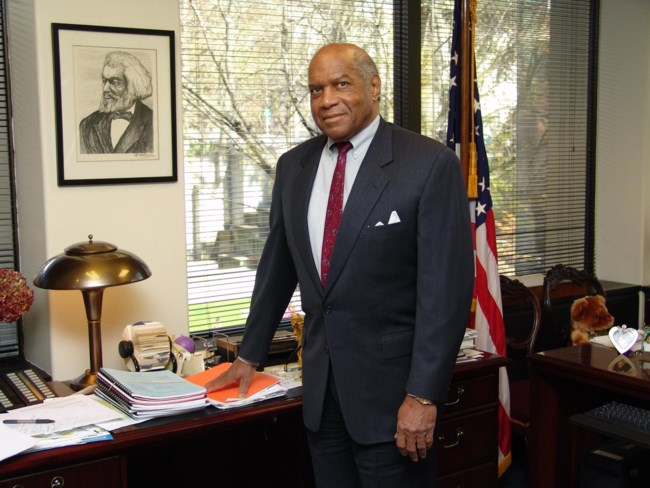 March 4, 1930 - July 23,2020 The Honorable Joseph Jerome Farris of the United States Court of Appeals for the Ninth Circuit, died peacefully in his Seattle home on July 23, 2020, four months after his 90th birthday. Judge Farris was born in Birmingham, Alabama on March 4, 1930. He earned a Bachelor of Science Degree with department honors in mathematics at Morehouse College in 1951. In 1948 he became a member of Alpha Pi Alpha fraternity at Morehouse College where he formed many friendships that lasted throughout his lifetime. Upon graduation from Morehouse, Joseph Jerome worked as a Radar Instructor at Keepler Air Force Base in Mississippi until he was later called for active duty reporting to Fort Monmouth, NJ. in March of 1952 From his youth, family has always been paramount in Jerome's life, and the tragic and untimely death of both of his young parents led to his honorable hardship discharge (1953) to help his elder sister Marian to care for his two younger siblings Joan age 16 and Julian, age 6. In 1955 Jerome, as he liked to be called, graduated from Atlanta University with a Master of Social Work Degree, and, with family matters well in hand, moved to Seattle where he worked as a probation officer and while he attended law school. He earned his Juris Doctor Degree at the University of Washington, where he was a member of the Law Review, the Oval Club, served as President of the Law School Student Body, and he became a member of the Order of the Coif. After graduation, he stayed in Seattle and began working for the law firm of Weyer, Roderick, Schroeter and Sterne. Within five years he and Leonard Schroeter started Schroeter and Farris, their own firm. It was during that time that Jerome married Jean Shy, a Spelman College graduate (‘51) he’d met while attending Morehouse College. Their family eventually grew to include two children, Juli and Janelle. During these years Jerome taught Sunday School classes and remained active in many civic and fraternal organizations including being the founding member of the Seattle Chapter of the Alpha Omicron Boule of Sigma Pi Phi fraternity. In 1969 he was appointed as a Judge on the inaugural Washington State Court of Appeals, Division I. There, Judge Farris was unanimously elected the first presiding Chief Judge of the Court of Appeals. He served on the court for ten years, when in 1979 he was appointed to the United States Court of Appeals, 9th Circuit, by President Jimmy Carter. Judge Farris served as the Chairman of the Executive Committee of the Ninth Circuit Judicial Conference in 1989. He is a past president of the University of Washington Board of Regents, on which he served for 12 years. From 1996 - 2005 he served as a member of the Board of Visitors for Harvard University’s Law School. He also served as a member of the Board of Trustees of Morehouse College from 1999 - 2014. And he recently served two terms on the Judicial Wellness III Committee for the Ninth Circuit. He is a former trustee of the Seattle-King County Bar Association and former Chairman of the Washington Council of the National Council on Crime and Delinquency. Over the years, the Judge was also an active member of the following: The University of Washington Law School Foundation, the Governor’s Conference of Library and Information Services, the Seattle Youth Commission, the King County Mental Health-Mental Retardation Board, and a delegate to the White House Conference on Children and Youth. He has served on the boards of the Seattle Urban League, Seattle Opportunities Industrialization Center, United Way, and the Totem Council for Girl Scouts of America. Judge Farris completed two terms of service on the United States Supreme Court Judicial Fellows Commission and one on the United States Judicial Conference Committee on International Judicial Relations. He is a past Chair of the Fellows of the American Bar Foundation and a member of the Senior Lawyers Division Council of the American Bar Association, a former secretary of the American Bar Foundation’s Board of Directors and a former Chairman of the Appellate Judges’ Conference of the American Bar Association. Throughout all of these accomplishments, Judge Farris held a love of life, family, and adventure. He traveled extensively and two of his favorite places to travel were his homes in Florence, Italy and Montego Bay, Jamaica. His life was filled with great friends from around the world, continuous learning, a quick wit and humor. He was predeceased by his parents, William Joseph and Elizabeth Farris, his wife, Jean Shy Farris, sister Joan McTeer, brother Harold Julian Farris and nephew William McTeer. He is survived by his devoted sister Marian Hatch, sister-in-law Pauline Mansfield, daughters Juli and Janelle Farris, and a host of nieces and nephews. In lieu of flowers, memorial gifts may be directed to Morehouse College, or the University of Washington Foundation Law & Justice Scholarship Fund. A celebration of life is anticipated in winter 2020 or spring 2021. You may share your memories and contact information for future service details at: www.butterworthfuneralhome.com
VER MÁS VER MENOS