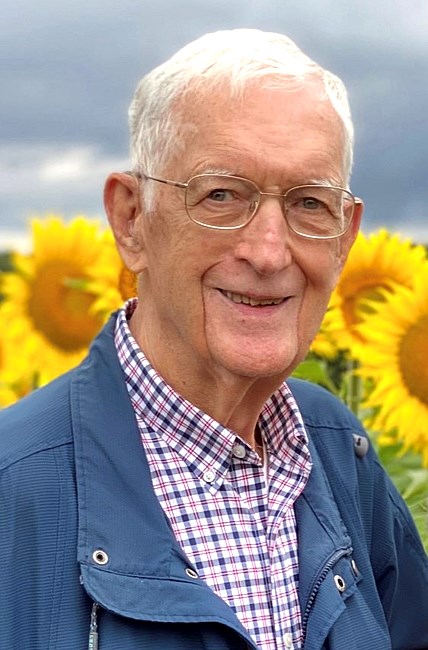 On August 6, 2022, after several months in the care of Angels Garden Nursing Home, Mr. William Joseph Retzbach Jr, age 88, passed away peacefully to join his heavenly father. Mr. Retzbach was brought into this world by his parents William Joseph Retzbach Sr. and Myrtle (McMahan) Retzbach on December 15, 1933 in Atlanta, Georgia Mr. Retzbach grew up in the south but held especially fond memories of his time, as a young and adventurous boy, in Austin, Texas. In his senior year of high school, his family moved to the Washington, DC. area where he attended St. John’s College High School graduating in 1952. He then attended the Catholic University of America earning an Electrical Engineering degree in 1956. After graduation, he served in the United States Air Force for several years rising to the rank of 1st Lieutenant. He went on to quietly serve the rest of his career at the National Security Agency. He met his bride, Rosalie (Hamilton) Retzbach, thru the Catholic Young Adult Club and were married in her home town of Alpena, Michigan on August 22, 1959. They had five children and raised a vibrant family in Adelphi, Maryland. Mr. Retzbach was a long-time parishioner of St. Camillus Parish in Silver Spring, MD, and often helped celebrate mass by reading the scripture. He enjoyed fishing, reading, and spending time with his cherished family. He remained close, and life-long friends, with many of those he attended high school and college with. They formed a “poker group” in which they met as couples for several decades, rotating for dinner each month at their respective homes. In the summer of 2018, they left their home of 50 years for a new life at Leisure World in Silver Spring, MD. In addition to his wife, Rosalie, Mr. Retzbach is survived by his brother Joseph Retzbach of Novi, Michigan, his children Michael Retzbach, Julie Pohutsky, Paul Retzbach, Lisa Kaintoch, and numerous grand and great-grandchildren. He was preceded in death by his son John, who passed away on February 24, 2018. A memorial service and Catholic Mass will be held at Our Lady of Grace Church, 15663 Norbeck Blvd., Silver Spring, MD 20906, on Monday August 22, 2022 at 10:30 a.m. with a celebration of life to follow.
VER MÁS VER MENOS