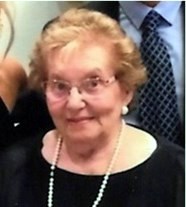 Edith Loeb was born in Manhattan on March 29, 1925 and passed peacefully on January 22, 2022 at age 96. She was the devoted wife of the late Leonard Loeb (9/1921-7/1992); and is survived by her 4 children: Michael Loeb, Felice Loeb, Deena DelMoro, and Nathan Loeb (with wife Anna). Edith loved her role as grandmother to Ryan Loeb, Daniel (with wife Adrienne) and Stephen (with fiancé Laura) DelMoro, and Jakob and James Loeb; and was blessed to welcome her great grandson Landon DelMoro. She was the loving daughter of Morris and Regina Starr, and the second oldest of six children (all of whom predeceased her) Helen, Ethel, Roslyn, Irving, and Shirley. Edith was part of a large, loving, hardworking extended family who remained close throughout their lives. She spent several of her childhood years in Uruguay during the Depression when her father secured a job as a chauffeur/mechanic for government officials who were importing their first American cars. After her sister Roslyn was diagnosed with leukemia, Edith and Helen quit school to accompany her back to live with grandparents in NYC where they worked to support her medical treatment. Edith continued to work while finishing high school following Roslyn’s passing, and steadily sent money to bring her family members back to America one by one. Leonard came into her life after he was Honorably Discharged for serving in the US Army Medic Division during WWII, and they married in 1949. They were the first in either family to purchase a home, landing in Blauvelt in 1955 - a home Edith continued to live in until 2019. While Leonard pursued his professional career in education, Edith was dedicated to her immediate and extended family as well as to those around her. She was extremely active within her community and was a familiar face at various board meetings well into her 90s! Edith was a life-time member of the PTA, Blauvelt Firehouse, and Blauvelt Library. She served on numerous committees within South Orangetown over the years to do tasks such as review the safety of bridges and traffic lights, investigate space utilization of schools, and fight for the relocation of the Post Office. In addition, Edith generously gave her time to drive cancer patients for treatment, helped local Meals on Wheels, walked door to door to conduct the US Census, lobbied annually to pass the local school budget, and served countless meals to the volunteer firemen after a late-night call. Edith’s sense of community and compassion will continue to be held dear by many, and she will be laid to rest besides her loving family in Mount Hebron Cemetery.
VER MÁS VER MENOS