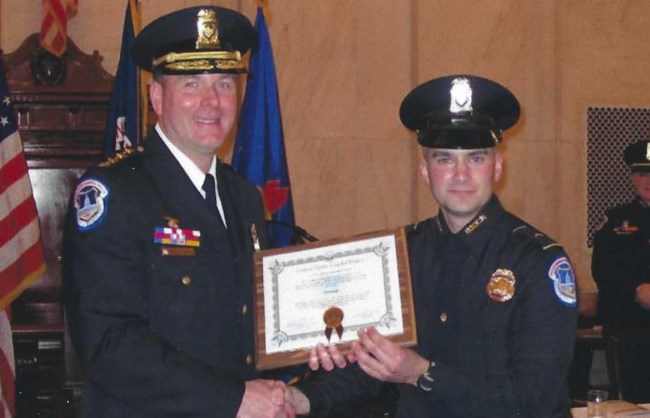 Brian David Sicknick was born on July 30, 1978, in New Brunswick, NJ, the youngest of three sons to Gladys and Charles Sicknick. He spent his formative years in South River, New Jersey and lived there until he became part of the Capitol Police family. He graduated from the East Brunswick New Jersey Campus of Middlesex County’s Vocational & Technical High School in 1996. He obtained his Bachelor of Science in Criminal Justice degree from the University of Phoenix on December 31, 2013. Brian’s life can be best characterized as being dedicated to public service. Brian Sicknick joined the New Jersey Air National Guard in 1997 as a traditional drilling Guard member. He served as a Fire Team Member and Leader at the 108th Security Forces Squadron, 108th Wing, located at Joint Base McGuire-Dix-Lakehurst, NJ. He deployed to Saudi Arabia in 1999 in support of Operation Southern Watch, and Kyrgyzstan in 2003 in support of Operation Enduring Freedom. He was honorably discharged in 2003. Brian joined the United States Capitol Police in July of 2008 and on his most recent assignment he served on the First Responders Unit. During his career, Officer Sicknick became a member of the mountain bike unit. His duties included patrolling the grounds and protecting those he was sworn to serve, as well as the public at large that visited the Capitol on a daily basis. Officer Sicknick’s empathy was evident in his commitment to rescuing dachshunds in his spare time. He enjoyed relaxing at home with his longtime girlfriend, loved watching M*A*S*H, Band of Brothers, South Park, and Reno 911, as well as a variety of action movies. Additionally, he was a big fan of comedians Jimmy Norton and Anthony Cumia. Despite his private persona, Officer Sicknick’s excitement and love for the NJ Devils could never be denied. Officer Brian Sicknick leaves behind both his parents, Charles and Gladys, two brothers, Ken and Craig, his longtime girlfriend of 11 years Sandra Garza, his Aunt Alberta, Uncle Ray, Cousin Aaron, his Aunt Elaine and his two dachshunds Sparky and Pebbles. End of Watch, January 7, 2021.
VER MÁS VER MENOS