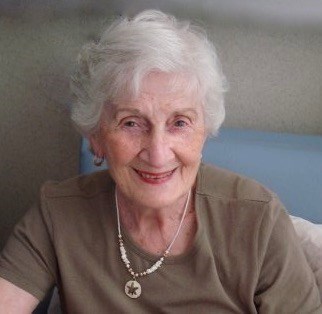 “Maggie”, “Mom”, “Nanny”, “Auntie Mag” passed away peacefully on September 20th, 2022 at CHSLD St-Lambert-sur-le-golf in St-Lambert QC, just one week short of her 98th birthday. Devoted daughter of Patrick Hayes (1898-1985) and Alexandrine Allard (1899-1989); loving wife of Redmond Cleary (1916-1979); caring mother of Johannah (Ted Wright) and Rick (Monique Lizotte); beloved grandmother of Michael Wright, Allison Wright (Jesse Bunnell) and Megan Cleary; doting great-grandmother of Francis, Liam, Kaelin (2005-2008), Eirinn, James, Gabriel and Roslyn… and much-loved aunt and great-aunt of many. Maggie grew up the eldest daughter in a large working-class family in Grand-Mere QC. She was a fearless trailblazer and a bit of a daredevil. She worked full-time outside the home long before it became fashionable to do so. She held progressively important managerial positions in the financial services industry, largely in the (then) new field of data processing. She virtually never missed a day of work, yet her permanent priority was always caring for her family. Those of us left behind will miss her love, her boundless positivity, and her wonderful sense of humour. In accordance with her wishes (and lifelong efforts not to be the cause of any fuss), there will be no visitation or public funeral service. A Celebration of Life with her immediate family members will be held in the near future. In lieu of flowers, Maggie would like you to “have a nice big slice of tarte au sucre with two scoops of ice cream to cut the sweetness… and then get back on your diet Monday”.
VER MÁS VER MENOS