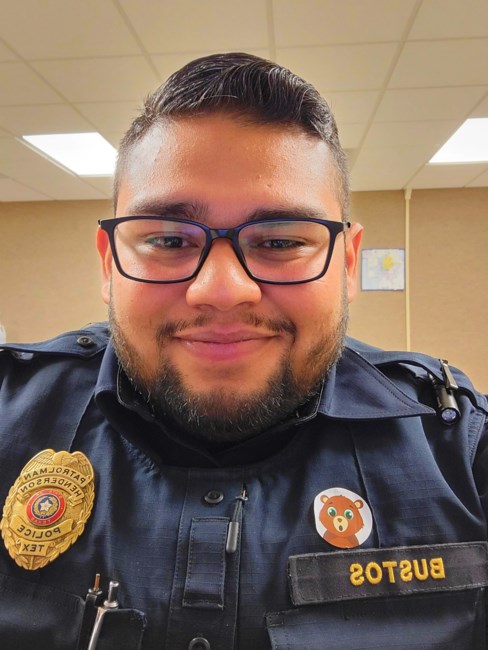 Smith County Sheriff's Deputy Lorenzo Bustos, age 29, of Whitehouse, Texas passed away in the line of duty on Friday, July 29, 2022. Lorenzo was born on Monday, February 15, 1993 in Tyler, Texas to Martin and Rosa Bustos. Lorenzo graduated from Chapel Hill High School in 2011, where he was known as the class clown who consistently had a bright smile and could make everyone laugh. Lorenzo was always fond of Gloria and, through his dedication, their love story began on May 20, 2009. The high school sweethearts married on Friday, November 4, 2011 and have been inseparable ever since. Lorenzo would do anything for his "Honey." Lorenzo was so excited to become a father. He and Gloria have three wonderful children, Hunter or "Top Shot," Emma or "BumBum," and Jacob who is known as "Papi's Best Friend." He enjoyed reading books and telling them stories of "catching bad guys." As an outdoor enthusiast, he enjoyed tent camping and kayaking on the Guadalupe River with his wife. Lorenzo loved to hunt and fish, especially with his kids, and was with his son, Hunter, when he shot his first deer. Lorenzo taught the importance of providing to put food on the table for his family. Lorenzo was a loyal member of Friendly Baptist Church in Tyler, Texas. He had a passion for helping others and advocated doing the right thing, no matter what. Lorenzo's family will remember him for his bigger than life personality, sense of humor, deep family commitment, and continual love. His brothers and sisters in blue will remember his moral standards, high ethics, investigative knowledge, unmatched expertise, and his dedication to serving others. Being childhood sweethearts and lifelong soul mates, Gloria supported Lorenzo in fulfilling his lifetime commitment to law enforcement. Lorenzo was part of the generation who understood pressing through during hardships with faith, strength and courage. Lorenzo started his path towards law enforcement in 2012 when he was hired by the Texas Department of Criminal Justice as a Corrections Officer and was promoted to Sergeant in 2016. Lorenzo decided to continue his dream of becoming a police officer and started the East Texas Police Academy August 12, 2019. He worked full-time at the prison while attending the night academy and graduated March 28, 2020. He went to work for the Rusk County Sheriff's office and then moved on to be a patrol officer for the Henderson Police Department. He and Gloria moved to Whitehouse in 2021 and he realized he wanted more opportunities in his career and decided to apply for the Smith County Sheriff’s Office. He began his career with the Smith County Sheriff's Office on February 20, 2022. Lorenzo was dedicated to his family, his church, and his profession, and through his commitment and devotion has impacted countless people along the way. He displayed kindness, honor, loyalty, and patriotism that define a true hero. Lorenzo and his infectious laugh will be greatly missed by all. Left behind to cherish Lorenzo's memory are his beloved wife, Gloria Bustos; children, Hunter L. Bustos, Emma A. Bustos, and Jacob T. Bustos; parents, Martin and Rosa Bustos; sister, Leslie Bustos; brothers, Eduardo Bustos, and Martin Bustos; and countless other family members and friends. A time of visitation for Lorenzo will be held Thursday, August 4, 2022 from 4:00 to 7:00 p.m. at the Friendly Baptist Church. A celebration of life will occur Friday, August 5, 2022 at 10:00 a.m. in the Worship Center at Green Acres Baptist Church, officiated by Pat Alvey, Steve Lyles, and Dan Lewis. Fond memories and expressions of sympathy may be shared at www.tylermemorial.com for the Bustos family.
VER MÁS VER MENOS

A Time of Visitation