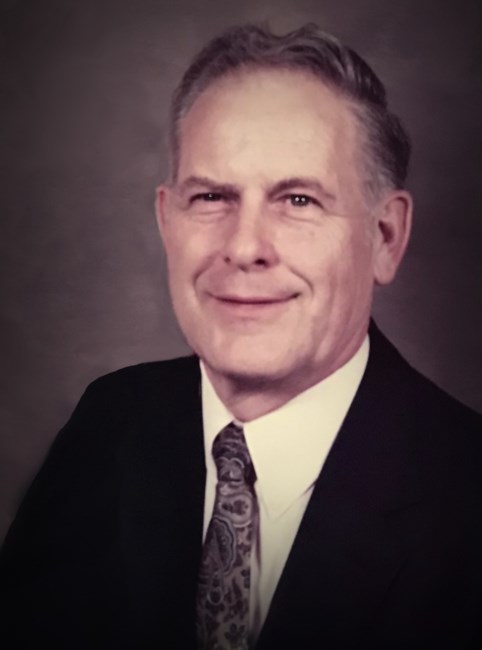 Alben Charles Johnson, age 96, of Rancho Cucamonga, California, and cherished husband to Vyla Mae Johnson for 68 years, passed away September 11, 2022, at home. He was under the care of his devoted daughters, Cheryl and Charlene, with the assistance of Hospice nurses. Chuck was born in Ogden, Utah, March 21, 1926, to Clara Deborah Peterson and Alben Sivard Johnson. Parents and siblings, Leone, Norma and Elva Marie have proceeded him in death. Chuck’s father died of pneumonia when he was two years old. The family then moved to Los Angeles to live with their grandmother. Later they moved to Fontana, where Chuck helped raise chickens and developed his interest in transistor radios. He built and repaired the radios in a little workshop on their property. He was taught how to play the piano from his mother Clara and spent many years playing the organ at church. Chuck graduated from Chaffey High School, Ontario, California in 1944. He joined the Navy during WWII later that year and chose to focus on training in electronic repair for ships. He was deployed on a ship in the Pacific Fleet until 1946. After his war time service, he served a 2-year mission in Sweden, for The Church of Jesus Christ of Latter-day Saints. Teaching the gospel of Jesus Christ brought him great joy. He married Vyla Thompson in 1950 in the Manti Temple, Utah. Professionally, he continued his education at Cal Poly San Louis Obispo, graduating with a degree in Electrical Engineering in 1951. After graduation he worked for General Dynamics in Pomona starting in 1953. In 1966, he left General Dynamics for a part timer teaching position at the Cal Poly Pomona campus. Teaching there, he soon became a full-time Professor at Cal Poly. He also continued part time consulting for General Dynamics on various missile guidance system projects. As a full professor, he taught a great variety of electrical engineering courses, including courses on microwave transmission. He was deeply loved by his students until he retired at the age of 65. During his retirement from teaching, he also did cold fusion research with Professor Jones and his friend Frank Keeney. With obviously a very busy career, he was still able to find a way to go camping with the family to many national parks, target shoot, have fun with motorcycles, and build or fix just about anything. He lived in his home of 58 years in Rancho Cucamonga, California, where he thrived with creative engineering and building. Vyla, being an artist, would often draw up an idea, and the Chuck would design and build it. Chuck is survived by his children, Alan, Doug, Cheryl McBeth, Bruce and Charlene Bradley. He has also nurtured and loved 24 grandchildren and 57 great-grandchildren. He will be greatly missed, but the legacy he has created for his children, grandchildren, and great grandchildren will live on in their lives.
VER MÁS VER MENOS