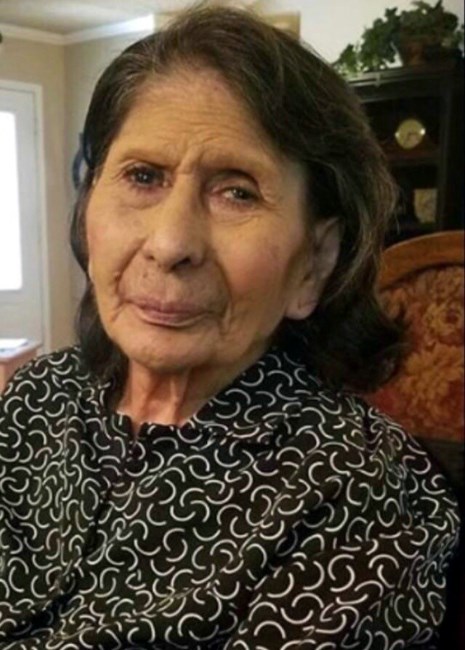 Pauline Rosas Cuevas, aged 94, passed away while surrounded by loved ones on Monday, January 17, 2022 at Regent Care Center in Woodway, Texas. Pauline Rosas Cuevas was born on January 15, 1928 in Marlin, Texas to parents Paramon Rosas and Paula Arguello Rosas. She will live on in our many cherished memories of her, such as how hilarious she was. She was the family clown, always cutting up, having us in tears laughing. On Sundays, after church, her house was the place to be for a great meal. Her mole, arroz con pollo, and tortillas were the absolute best. Our grandmother Ama, the greatest grandma ever, would be there along with some tio’s, tia’s, primos and primas sharing laughs and stories. She loved music and loved singing, and it wasn’t always Christian music. One of her favorite songs was Blueberry Hill by Fats Domino. And she shocked us all by how heartbroken she was when Michael Jackson passed away in 2009. We didn’t even know she knew who Michael Jackson was. However, her greatest love was the Lord Jesus Christ. She was a lifetime member of The Spanish Assembly of God Church in Marlin, Texas. When she could no longer recognize us because of her Alzheimer’s disease, we were saddened, but also amazed at how she never forgot how to praise her Lord and Savior, by singing or humming His praises through song. We are forever saddened by her loss, but we know that we will be reunited with her once more in Heaven. We are comforted in knowing that she is now fully restored, fully healed, in all her glory in Heaven. She was the last of a generation, and she is finally reunited with her parents, her siblings, our father, and our brothers that have gone on before us. She is preceded in death by her husband, Aristeo Cuevas Sr., infant son Buddy Cuevas, son Edward “Lalo” Cuevas, and daughter-in-law Yolanda Cuevas. She leaves behind to cherish her memory, daughter, Pauline Cuevas Ramirez and husband Reverend Al of Hewitt; son, Reverend Israel Cuevas and wife Olga of Angleton; son, Reverend Aristeo (Irie) Cuevas Jr. of Robinson; son Ruben Cuevas and wife Sue of Archbold, Ohio; daughter, Mary Jo Cuevas of Waco; son, Richard Cuevas of Waco; grandchildren, Irie (Friend) Cuevas and wife Sarai of Waco; Sonya Guerrero and husband Olan of Robinson; Israel Cuevas of Robinson; Kimberly Ramirez of Hewitt; Reverend Ruben Cuevas Jr. and wife Delia of Houston; Jacob Cuevas of Houston; and Jennifer Cuevas of Archbold, Ohio. Great-grandchildren, Alyssa Guerrero of Robinson; Olan Guerrero Jr. of Hewitt; Ma’Ryah and Kamryn Cuevas of Robinson; and Ethan and Evan Cuevas of Waco. Great-Great Grandchildren, Ryan and Myla Guerrero of Robinson; Olan III and Scarlett Guerrero of Hewitt. Serving as Pallbearers: Irie (Friend) Cuevas, Israel Cuevas, Ruben Cuevas Jr., Jacob Cuevas, Olan Guerrero II, and Ethan Cuevas. The family will receive friends on January 21, 2022 from 6:00 – 8:00 PM at Connally Compton Funeral Home, 4400 W. Waco Drive, in Waco, Texas; with prayer service at 7:00 PM. Funeral Services will be held the following day January 22, 2022 at 11 AM at Faith Walk Church, 700 South Robinson Drive, in Robinson, Texas with (son) Pastor Irie Cuevas officiating. Burial will follow at Hillcrest Cemetery in Marlin, Texas. 1 Peter 5:10 – “And the God of all grace, who called you to his eternal glory in Christ, after you have suffered a little while, will himself restore you and make you strong, firm and steadfast”
VER MÁS VER MENOS