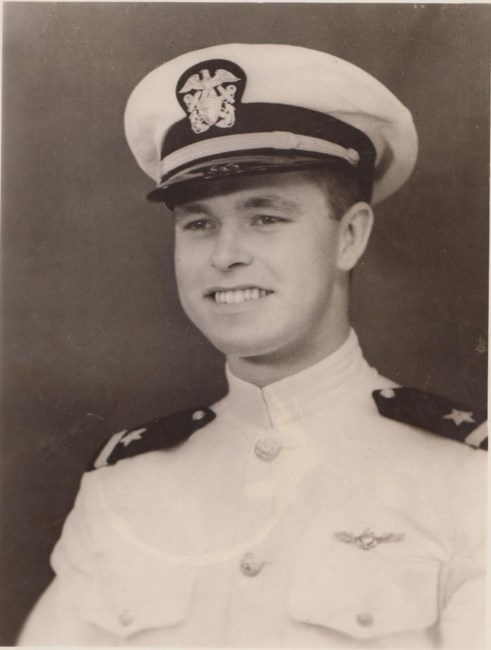 Harlon Nelson Harvey, age 91. Born March 21, 1921 to Elvira and Harlon Harvey in Chicago, Illinois. Died May 21, 2012. Married to his sweet Marie for over 57 years. From a note to Mom in 1944..." I love you half of all the love in the world because you love me the other half...and that's all there is." Survived by daughters Cherie Murphy and Kathy Pevey and son Tom. Dad had special love and thanks for Pam Harvey for all the years of special care and love, for Shawn and Fran for their tender care, for his sweet 102 yr. old sister in law Angie Divenere and his best friend Helen Wollen. Navy Captain, WW 2 war veteran and hero. He flew blimp rescue missions and hunted German submarines during the war. Senior executive at Western Electric after the war for 30 years. Proudest accomplishment and lasting legacy are his 13 grandchildren and 27 great grandchildren; God, Country and Family. A Mass of the Resurrection will be held on Thursday May 24, 2012 at 11 AM at St. John the Evangelist Catholic Church with Father Rolo Castillo officiating. Following the service, he will be cremated and transported to Omaha, Nebraska where a Mass of the Resurrection and a graveside service will be held at a later date. In lieu of flowers, memorial contributions may be made to the Potentials Foundation by visiting www.potentialsfoundation.org/donate.html Those wishing may share a memory or an online condolence by visiting www.reynoldshamrickfuneralhomes.com Arrangements entrusted to the Waynesboro Chapel of Reynolds Hamrick Funeral Homes.
VER MÁS VER MENOS

A Mass of the Resurrection