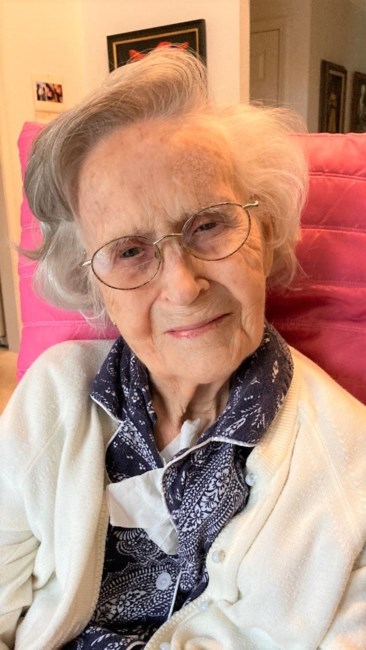 Toini Ingrid (Harju) Bassell,101, lifelong Wethersfield resident, loving wife, mother, grandmother, and great-grandmother, peacefully passed away Tuesday, September 13, 2022, with her two daughters by her side. She was the beloved wife of the late Robert F. Bassell, who predeceased her in 1995. Toini was born February 27, 1921 in Hartford, daughter to the late Oiva and Anna (Manninen) Harju. She was a strong, smart, driven woman, with a deep respect for her Finnish background. She attended Wethersfield schools, graduating from Wethersfield High School, Class of 1939. She attended Morse Business College, Hartford, graduating in 1940. Toini began her work career in 1941 at WDRC radio, where she remained until taking time off to start her family. She returned to work in 1958, ultimately securing employment with the State of CT as a stenographer and working her way up to become Special Assistant to the Deputy Transportation Commissioner. She retired in 1976. Toini was an avid Bridge player, as well as an accomplished artist who painted until age 99. One of her most special and admired works was the portrait she painted of her mother, Anna. She loved to share her art with her family. Toini will be deeply missed and forever remembered in the hearts of her family. She leaves two daughters and sons-in-law, Kathleen B. and Richard A. Karwic and Barbara and Harry Gough, all of Wethersfield; two sons and a daughter-in-law, William and Jacqueline Bassell of Ft. Pierce, FL and Thomas Bassell of South Glastonbury; a sister-in-law, Betty Bassell and a sister-in-law and brother-in-law, Lillian and Robert Grenier; two special cousins, Salme and Aileen; nine adored grandchildren, Robert Karwic and Tim Swoape, Michael and his wife Amanda Karwic, Glenn and his wife Beth Karwic, Jeffrey and his wife Alicia Karwic, Christian Bassell, Tiffany Heath, Ian and his wife Elizabeth Boccaccio, Cara and her husband Joseph Almon, Kalyn and her husband Michael Carmody, as well as fifteen cherished great-grandchildren, Nathan, Samuel and Leah Karwic, Emily and Sarah Karwic, Griffin and Juliana Karwic, Maxwell, Sofia and Jack Boccaccio, Liam and Norah Almon, Mila and Rocco Pacelli and Michaela Carmody. Friends and relatives may pay their respects to the Bassell family on Monday, September 19 from 9:15-10:15 a.m. at the D’Esopo Funeral Chapel, 277 Folly Brook Blvd, Wethersfield followed by a Mass of Christian Burial at 11:00 a.m. in the Church of the Incarnation, 544 Prospect Street, Wethersfield. Interment will follow the Mass in Rose Hill Memorial Park (Section 23C), Rocky Hill. To extend online expressions of sympathy, please visit www.desopofuneralchapel.com.
VER MÁS VER MENOS