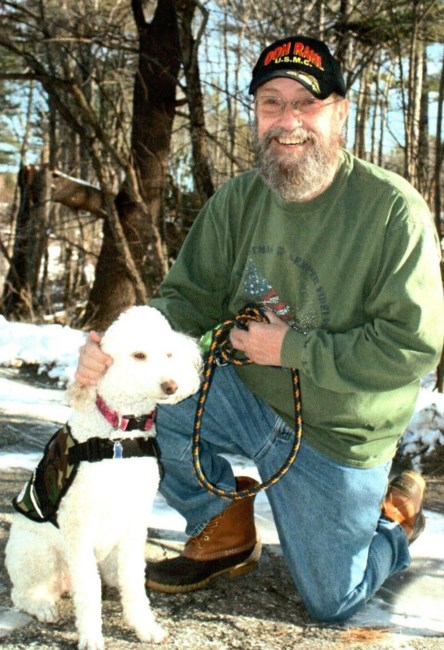 Cumberland- Bruce Wayne Gagnon, 72, passed away on November 19, 2021, with his loving family by his side, and under the compassionate care of his daughter/nurse Nicole. Bruce was born in Portland, Maine on June 5, 1949; he was immediately adopted into the loving arms of Oscar and Freda Gagnon. Bruce often talked about the wonderful childhood he had growing up in Yarmouth, North Yarmouth and at their camp on Crystal Lake in Gray. He enjoyed sharing a multitude of fond memories, from a once-in-a-lifetime adventures, to deep seated morals that he carried throughout his life.

In 1967, Bruce joined the Marine Corps, to become one of "The Few, The Proud, The Marines". He fought alongside his brothers of Fox 2/7 in Vietnam and formed lifelong bonds that only a Marine would understand. The Marine Corps shaped his life in many ways, helping to make him the honorable man that he was.

After serving his country, Bruce built a career in the environmental services, first at JetLine, then at Clean Harbors. He also built an incredible life with his soul mate, Judy. Bruce and Judy were married on October 3, 1981 and they spent 40+ years of endless love and laughter together.

After many years battling PTSD, Bruce was finally able to find peace, with Judy by his side and with help from the Portland Vet Center and after reconnecting with his Marine Corps brothers of Fox 2/7, in the year 2000.

Bruce's family was the center of his life. He enjoyed traveling, boating, hunting, volunteering and his regular "Monday meeting" at the Portland Vet Center, with other Vietnam veterans. One of Bruce's lifelong dreams came to fruition in 2019, with an epic moose hunt, with his son Adam and friends.

Bruce and Judy were members of the Lions Club in Cumberland. They also volunteered at Maine Paws for Veterans, an organization that was near and dear to his heart, working with veterans, providing service dog training and support.

Bruce is survived by his wife Judy, their daughter Nicole Gagnon and her significant other Chad Googins, of Cumberland, his son Adam Gagnon and his wife Michelle, of Newcastle, his son Jeremiah Gagnon and wife Cindy of Gray. He is also survived by his wonderful grandchildren, Haylee Gagnon and her significant other Drake Toman, Courtney and Ruby Gagnon, Jayden and Maddox Gagnon-Baker, Ava Googins, and Shyanne Gagnon, his sister Sharon DeRoche and her husband George Reese, as well as several nieces and nephews. Bruce also leaves behind his beloved service dog, Foxy.

Bruce's family would like to extend their heartfelt thanks to Dr. Tchekmedyian and his team at MaineHealth Cancer Care for their compassionate and unyielding care that they provided for Bruce and his family. A special thanks also goes to Northern Lights Hospice for their support.

Family and friends are invited to attend an hour of visitation on Saturday, November 27, 2021 from 1-2 PM at Lindquist Funeral Home, 1 Mayberry Lane, Yarmouth. A memorial service with military honors will follow at 2:00 PM at the funeral home.

In lieu of flowers, please consider a donation in Bruce’s memory to Maine Paws for Veterans, PO Box 516 Topsham, ME 04086.