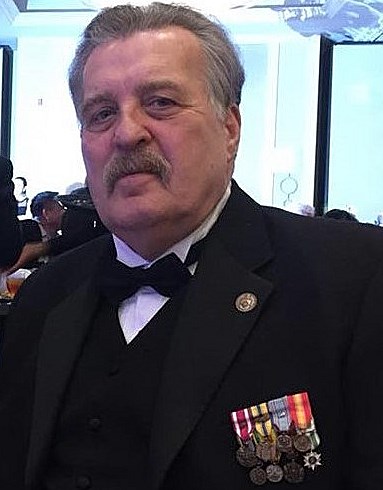 Jacob L. Boesen, or "Jake" as he was known amongst his family and friends, passed away at the age of 72 on September 27, 2022, in Arlington, VA. He went peacefully into the blissful morning sun, surrounded by his loving wife and children. Jake lost his short battle with thyroid cancer which was diagnosed this past spring. Jake was one of eleven children born to Kenneth and Helen Boesen, on April 21,1950 in Rock Falls, Illinois. The epitome of a patriot, Jake selflessly dedicated his life to protecting our nation. He provided over 53 years of combined military and federal service to his country. During his tenure in the Air Force he served as a security forces superintendent, supervisor, and master instructor. Following his military career he supported the Intelligence Community as a contract specialist in national security, counter-terrorism and counter intelligence. Jake enlisted in the Air Force in 1969, serving just over 20 years on active duty before retiring at the rank of Senior Master Sergeant (SMSgt) in 1990. A gifted writer, Jake began his career in the Air Force as a Public Affairs specialist before crossing over into the Security Forces Branch, where he spent a majority of his career in military. During this period, he conducted one Combat Deployment to Vietnam in 1972, served as a senior tactics instructor where he was recognized as the 1984 Training Command Instructor of the Year, and concluded his service working multi-national counter-terrorism efforts across Europe. Jake served his career with distinction earning a selection for E-9/CMSgt, the highest rank that can be bestowed upon a Non-Commissioned Officer, which he forfeited to retire from the service. Following his retirement from the Air Force, Jake served for the next 30 years across multiple contract entities serving within the Intelligence Community. This included support to the Department of Energy, Defense Intelligence Agency, and Central Intelligence Agency. During this timeframe, he provided service as a senior instructor on counter-terrorism followed by operational support to the Global War on Terror. Jake contributed to some of the nation’s most monumental successes during the War on Terror, formally recognized by the Intelligence Community with a Prestige Service Award. Over the last 15 years he worked in positions of critical importance, serving as the Executive Officer in two separate intelligence operations directorates focused on our nation's utmost counter-terrorism efforts. Dedicated to his nation, he sacrificed greatly doing what he loved, serving his country up until his terminal diagnosis. Anyone close to Jake knew he was extremely proud of his service, but more so he was proud of those he served with and the accolades of his children. Jake was beloved and revered by many. He possessed a larger-than-life aura, a distinct deep booming voice, natural cowl and daunting stature. Noticeable from afar, his vigor and mystique would instantaneously occupy the room. However, behind this formidable exterior laid the gentlest of men who truly cared about everyone he came across. Friends, family, and co-workers alike all boasted of his vibrant personality and willingness to help anyone at the drop of a dime. Everyone who had an opportunity to know Jake was touched in some way or form by his kindness. For leisure Jake had two passions, his guitars and love for Chicago based sports teams. From his time as a young adult up through the years he was a gifted musician with an affinity for the Beatles. He maintained an extensive collection of guitars and records as he thoroughly enjoyed the rock and roll music from his era. Outside of his musical ambitions, Jake was an avid Chicago sports fan, but had a particular love for Notre Dame Football. Many Saturdays were spent traveling across the mid-Atlantic and Mid-West, gathering as a family to watch the Irish. Of most importance to Jake was his role as a father and husband. In 2007 he met the love of his life Monique, cementing their love for one another in 2009. Jake spent the remaining years of his life in true happiness enjoying his passions but most of all building memories with his loving wife, children, and grandchildren. Jake is survived by his wife Monique, six children, Craig, Kelly, Jacob Jr. (Rebecca), Rhett (Nerissa), Evin, Stephanie, and four grandchildren. Viewings will be held on Saturday, October 15 from 2 PM - 6 PM and Sunday, October 16 from 10 AM - 12 PM and 2 PM - 4 PM at Murphy Funeral Home, 4510 Wilson Blvd, Arlington, VA 22203. Please see Facebook for the private group Jacob Boesen Memorial Details for more information (https://www.facebook.com/groups/808214106973607/?ref=share). Burial will be held in 2023 at Arlington National Cemetery - further details at a later date. “People sleep peaceably in their beds at night only because rough men stand ready to do violence on their behalf” – George Orwell Until we meet again, with much love.
VOIR PLUS VOIR MOINS