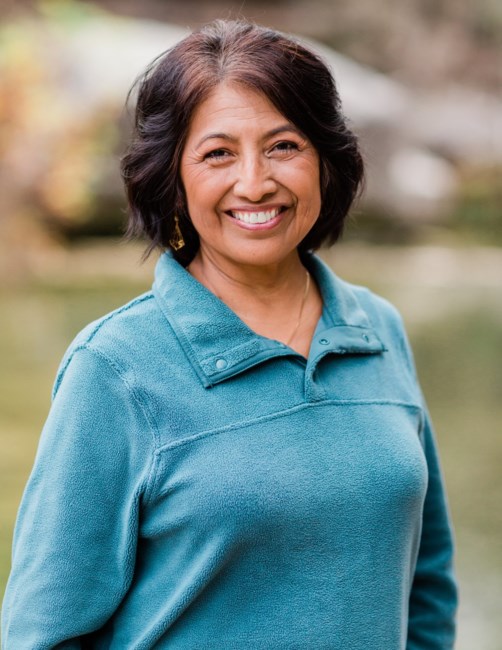 Hortencia Contreras Edwards, Tencha, passed away on Tuesday, July 26, 2022 surrounded by her loving family. She was born on June 14, 1965 in Veracruz, Mexico to Andrea Santiago and was the oldest of 7 siblings. She lived in Mexico until the age of 19, when she moved to Austin, Texas. Through mutual friends Kiki and Carnie Littlefield and Pat and Sue Mann, Tencha was introduced to her future husband, Herman Edwards. Tencha and Herman were married on June 15, 1985 and would spend the rest of her lifetime together in Holy Matrimony. Tencha and Herman would then be blessed with three children, Nathan, Natalie and Jodie. Their family later grew when their oldest, Nathan, married Chelsea and they had Tencha’s first grandchild, Logan Edwards. As a devout Christian, Tencha was an active member of Victory Christian Center Church, now Victory City Church. She served as a Spanish speaking translator and assisted in the parking lot kitchen where she served the community. Tencha always had a love for others and showed God’s Spirit through her presence, actions and contagious smile every day. She had an uncanny ability to reach children in a deep and positive way. Her love for children prompted Tencha to begin an in-home daycare. She volunteered at Victory Christian Center Church nursery for over 20 years and was later employed for 8 years as a lead teacher of the infants. In 2016, Tencha received her Associates Degree in Child Development and began working at the University of Texas Childhood Development Center. Tencha was passionate about teaching and helping children. She dedicated her life to the developmental growth of children. In her own words, “ I (Tencha) love seeing every child unique and special in their own way and I am privileged to be a part of their developmental growth.” She had a heart of gold and it showed when she poured everything into the many children that crossed her path. She will be deeply missed by family and friends, but her memory will live on in those she loved, and who loved her in return. Hortencia is lovingly remembered by her husband of 37 years, Herman; her children: Nathan (Chelsea), Natalie, and Jodie; and grandchild: Logan. Her sister: Chela, and brothers: Aurelio, Eusebio, Margarito, Lucas, Fernando, Guillermo. Services will be private. Fond memories and expressions of sympathy may be shared at www.wcfishsouth.com for the Edwards family.
VOIR PLUS VOIR MOINS