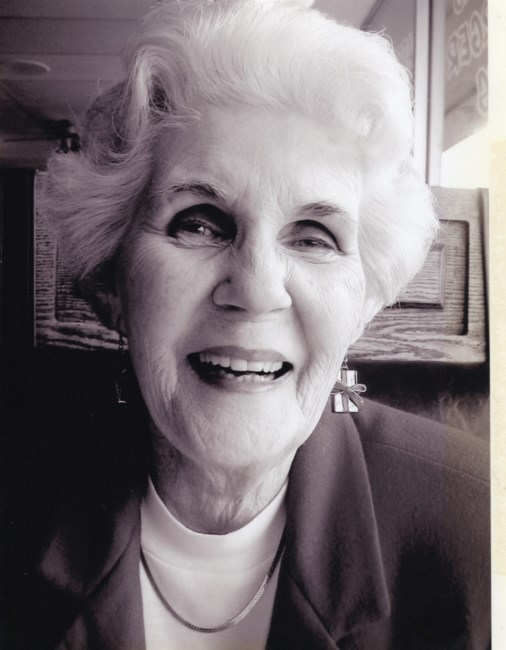 Annie Stewart Calhoun Jackson Annie Stewart Calhoun Jackson died on August 3, 2022. She was the only child of Dr. L. L. Calhoun and Georgie Bryant Allen Calhoun. She was born April 27, 1925 at the Baptist Hospital which is now Brookwood Baptist Princeton. A life-long resident of Birmingham, she grew up in Norwood and Woodlawn. She attended Phillips High school and one year at Birmingham-Southern College. Her childhood included precious days with the Allens of Cromwell, Al. and the Calhouns of Grove Hill, Al. Those people and memories of them sustained her for many years. She joined First United Methodist Church in Downtown Birmingham on April 16, 1933 and stayed a member her whole life. For 15 years she was the “voice” of First Methodist as she worked as the membership secretary and receptionist there. She counted working with Fletcher Thorington, Ralph Bates, Sara Baker, Sara Jones and a host of associate ministers as among her happiest days. Annie Stewart and Henry G. Jackson, Jr. wed on Dec, 28, 1946. They then moved to Auburn where H.G.completed his architectural degree and she supported them. Living in an apartment across the hall from Bibb and Louise Allen bonded them and they stayed life-long friends. Annie Stewart made friends easily and loved nothing more than being with them. Her sewing club (which didn’t sew), church, the McDorman/Allen Sunday School class, the “Tuesday Ladies” of the Brookwood Hospital Volunteers and her card playing group, were her dear friends in life and beyond. One friend was particularly important to her. At BSC, she began her close friendship with Buttercup Cary. Over the next 60 years they raised children, dealt with husbands, talked daily on the phone, and had mad-cap adventures. She was an active musician and played piano for many groups as well as sang in Church quartets and in programs around the city. She is survived by her three children, Stewart (Robin), Betty (the late Frank McArthur) and Peggy. She has 7 grandchildren, Meredith, Mollie, John Stewart, Sam, Casey, Kelley, and Joseph. Her 13 great-grandchildren are: Lydia, Miriam, Henry, Svea, Corinne, Maya, Maria, Arturo, Braxton, Jackson, Emily, Maddie, and Robbie. She lived modestly but counted herself wealthy in love. The family wishes to express deep appreciation for the love and care she received from the Lipford Agency and the Fair Haven Nursing units. Additionally, the counsel of Steven Benefield and all those at FirstCall Financial were a comfort to her. Thanks to them and others our Mother now rests in peace with “… all those who rejoice with us, but upon another shore and in a greater light, that multitude which no one can number, whose hope was in the Word made flesh, and with whom, in this Lord Jesus, we for evermore are one.” A Service of Death and Resurrection for Annie Stewart will be held Friday, August 12 at 11 am at the First United Methodist Church, 518 19th Street No., Birmingham, Al 35203 with the Rev. Stephanie York Arnold and Rev. Brian Erickson officiating. Visitation prior to the service at 10. In lieu of flowers please direct gifts to Birmingham First United Methodist Church. Fond memories and expressions of sympathy may be shared at www.johnsridouts.com for the Jackson family.
VOIR PLUS VOIR MOINS