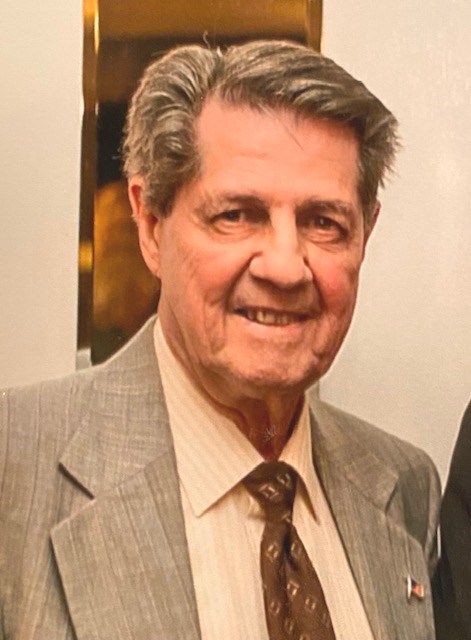 George Perry Samuel (Sam) Hiett, age 87, of Canton, Ohio, passed away in his sleep on Monday, November 15, 2021. Sam was born on September 18, 1934, in Kalamazoo, MI, to the late Paul C. and Ruth M. (Easterly) Hiett. He was a 1952 graduate of Kalamazoo Central High School where he was credited with building Kalamazoo's first homemade TV as a science project. Sam cherishes a 1953 'thank you' letter from Rev. George Bennard, author of the hymn "The Old Rugged Cross", for repairing and tuning their piano in Reed City, MI. After attending Valparaiso Technical Institute, IN, he was hired at Goodyear Aircraft in 1954 to work on the GEDA computer and Matador/MACE missile. On a leave of absence, Sam served 4 years in the U.S. Air Force doing radar maintenance and teaching OJT electronic servicing. The last two years were at Brize Norton Royal-Air-Force base in England, where he attended classes at nearby Oxford University.

At the 1958 World's Fair in Brussels, Belgium, Sam met Michette from Veviers, Belgium. They were married August 22, 1959, in Kalamazoo, MI. Sam resumed work at Goodyear Aircraft in the Environmental/Qualification Test lab and completed his B.S. degree in Electronic Engineering. In 1963 he was sent by then Goodyear Aerospace to Ramstein A.F. Base, Germany, to install MACE missiles during the Cold War. A most memorable vacation followed in Zermatt, Switzerland, hiking part of the Matterhorn mountain with Michette.

After 45 years of service, Sam retired in 1999 from the Brake Control Systems Engineering department of Aircraft Braking Systems Corporation, formerly GAC, where he was past president of Aerospace Electrical Society and an officer in Goodyear's 25 Year Club.

Sam held membership in the North Canton Elks Lodge 2029, Canton Lodge No. 60, F. & A.M., Zoar Community Association, and Camp Tuscazoar. He was an associate member and past secretary of Buckeye #1 chapter of Veterans of the Battle of the Bulge; owing to Michette being born in that area of Belgium. Her family survived Nazi occupation and was liberated by U.S. soldiers in the largest land battle of World War II. Her many talks at schools and civic functions prompted an honorary VBOB membership in 1993 where both have been active since.

Sam is a 5th generation descendant of James Alexander Perry, younger brother of Commodore Oliver Hazard Perry, victor of the Battle of Lake Erie in 1813. He was a devoted husband, father, grandfather, and friend; and will be remembered for his faith, concern, helpfulness, and wit.

In addition to his parents, he was preceded in death by his maternal grandparents, Fred C. and Elizabeth A. Easterly, who largely raised him, along with a loving aunt Altabel G. Van Bruggen, their eldest son, Navy Lt. Michael Perry Hiett, and half brother Paul Eugene Hiett.

(Above is authored by Sam Hiett)

In lieu of flowers donations may be made to Juvenile Diabetes Research Foundation at www.2.jdrf.org or mail to JDRF, 200 Vesey Street, 28th floor, New York, NY 10281.

Fond memories and expressions of sympathy may be shared at www.karlofh.com for the HIETT family.