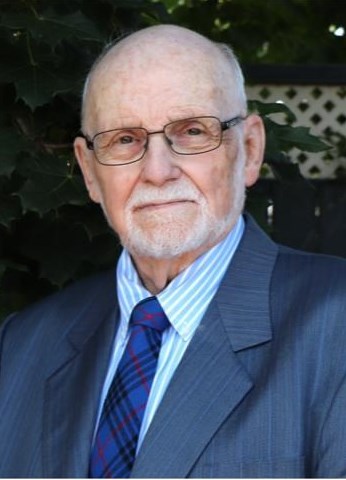 Ronald Wayne Quiring passed away Sunday, September 18, 2022 at the age of 88. He was born in Lucky Lake, Saskatchewan to the late Bernard and Audrey (Morgan) Quiring. He grew up on the family farm until he met a beautiful girl from Forgan who caught his eye and stole his heart. At the age of 24 he married Mavis Anne Hearl and began a love story that would last 64 years and produce 4 children: David (Starr), Derek (Kathleen), Wendy (Marc) and Tracey (Bob); 5 grandchildren, Benjamin, Patrick, Jeremy, Andrew and Finn; and two great grandchildren Blake and Kayden. He was very proud of his children, cherished his grandchildren, and worked hard throughout his life to give them all the best chance for success. Ron had a great love of history and geography – especially stories of the West. Each summer he would bundle his young family into the family station wagon and explore Canada and the United States, creating invaluable experiences and memories that were captured on video (even if the camera would invariably sway from the children at play to focus on distant mountains and wilderness). Over the years, and in celebration of his prairie roots, he assembled an impressive collection of John Deere models, rivalled only by a life-long passion of collecting RCMP memorabilia. He dove deep into genealogical research, and together with Mavis sketched out a family tree that included well over 1700 people and told the story of how the Quiring family emigrated to Canada from Kharkiv Ukraine when his father was only 18 months old. Ron was a humble man with a twinkle in his eye; a man who was always well attired in a business suit throughout his career in public service, and at home in colour-coordinated plaid shirt, ball cap, suspenders and vest. He was never afraid to tackle any number of home-improvement projects, often coming up with ingenious solutions while accessing his personal supply of tools and hardware that would rival any small-town hardware store. If there was a constant in his life, one that was more important than collecting or ice caps, it was the love and devotion he had for his wife, and his overriding desire for her comfort, safety and happiness. Ron and Mavis shared a special bond, one that may be a bit harder to see right now, but will continue to endure as long as there are stars in the sky. Ron is survived by his sister Dolores (Bob) Strelioff of Saskatoon, his brother Stephen (Carol) of Edmonton AB, and his sister, Sandra (Mel) Breunig of Provost AB. He was a true son of Saskatchewan. As expressions of sympathy donations to the Canadian Diabetic Association or the Heart and Stroke Foundation would be appreciated by the family.
VOIR PLUS VOIR MOINS