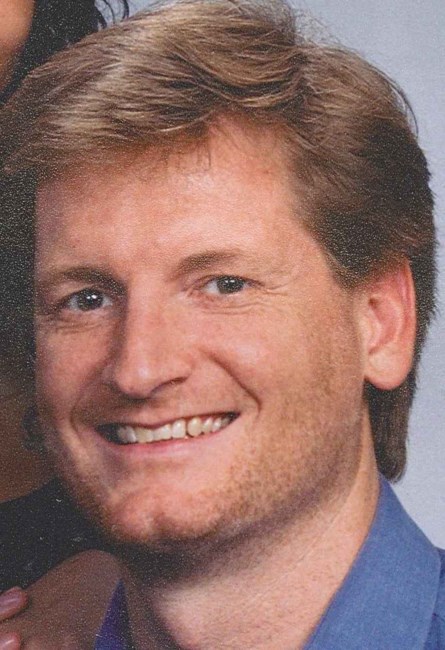 Brian was born with a full head of hair, a red head from the start, on April 13, 1968 in Bellflower, CA We moved to Seal Beach when he was five where he grew up. He was a quiet, thoughtful child, very gentle with our numerous pets, kind to friends and a loving and protective big brother. He was a gifted student in elementary school excelling in math and science. At Los Alamitos High School he played left tackle on the winning varsity football team and also loved playing pick up basketball which he continued to play throughout his life. Brian attended UC Santa Cruz. At the young age of 18, he met the one he would love until the end, Crystal Stovall. To look at their earliest photos together, it’s easy to see that they both were still “kids”, defining who they were and deciding who to become. In many ways, they grew up together. Life took them through many journeys, but in the end, what was left was love. Brian received his BA in Biology in 1991 and married Crystal that very summer. He followed Crystal to Ann Arbor, Michigan she would graduate from law school and give birth to his first beautiful baby, Brianne Adell. He returned to California to earn his PhD in Neuropharmacology from UC San Diego. Just a few days after defending his thesis in June of 2001, his second beautiful child, Jordan Haskell, was born. Brian’s PhD thesis was titled “Probing the structure of the muscle nicotinic acetylcholine receptor with Waglerin peptides.” He carried on with this line of research at the Pasteur Institute in Paris where his third beautiful baby, Davis Edwards, was born. After returning to the US, Brian worked in a Department of Defense laboratory where he focused on developing ways to protect against and treat exposure to botulism neurotoxins. Since moving to Texas, he had been working at the University of North Texas Health Science Center, where he researched the causes of dementia in HIV patients, particularly in the presence of other co-morbidities such as drug abuse. Brian’s co-workers described him as a good mate, always helpful, and “a bright, gentle and happy person.” His supervisor at the Pasteur said “he was such an agreeable and charming person. We are losing a very close friend.” His colleagues in Texas said he was committed to education, and did so much to help students. What attracted him to the research group was “the opportunity to mentor students, while helping solve problems for real people,” as he had done throughout his research career. As an adult he was always fun to be with, enjoyed people and irony of unique situations. His wonderful sense of humor, outrageous facial expressions, and good disposition made him fun to be with and attracted many friends over the years here in the states as well as in France. He was enormously proud of this three children, and enjoyed sharing news of their accomplishments with family and friends. As a father he cherished quality time with his family. From our kitchen window in Paris, Brian would hold a 3-year-old Jordan in his arms, who grinned and pointed out the trains rumbling by across the street. Jordan fondly recalls countless excursions throughout Paris’s rail systems as a pre-schooler, where Dad would go out on days off, just the two of them, with no other destination in mind besides the trains that so enchanted his son. His daughter, Brianne, took inspiration from Brian’s curious and wandering spirit to form her own adventures, and carries it with her to this day in her tastes for travel and urban exploration. As a family, we travelled western Europe by planes, trains, and automobiles. Brian was the self-appointed family photographer. Because of his work to preserve our memories, the family album is not only vast, but annotated in loving detail. It includes shots from Rome, Amsterdam, Luxemburg, Alicante (Spain), Marseille, other parts of the French countryside, and of course, every scenic byway or point of interest in between. His children remember every endearing moment he would take to steal a kiss from Crystal. More than once, those precious moments were immortalized in his film and videos. Brianne observes that each of his children have inherited a different piece of his tastes. For Brianne, that taste was music. All throughout her life, a healthy love of classic rock was fostered by recommendations from her father, exchanging gifts of memorabilia, countless moments of singing along to songs on the radio, and her own vocal accompayment to him playing the guitar. For Jordan, the taste was sports. He enjoyed a variety of sporting events with his father by his side. These included his own, as he took after his father’s high school athletic career, playing for his home baseball and football teams of Newman International Academy. At every game, his father was not only in the stands, but was down on the sidelines, talking with coaches and assessing Jordan’s injuries. For Davis, it was nature. He fondly recalls hikes, mountain bike rides, and ant farming with his dad. He equally cherishes those lazy indoor afternoons spent among legos, cooking and, as Davis put it, ”just being a dad in general”. As Davis says: ”dad may have left us in the physical form but he lives on in the spirit, through our memories together”. Brian is survived by his wife, Crystal, daughter Brianne, and sons Jordan and Davis, his sister Laura and parents Stan and Helen, his large extended family, and a multitude of friends around the world.
VOIR PLUS VOIR MOINS