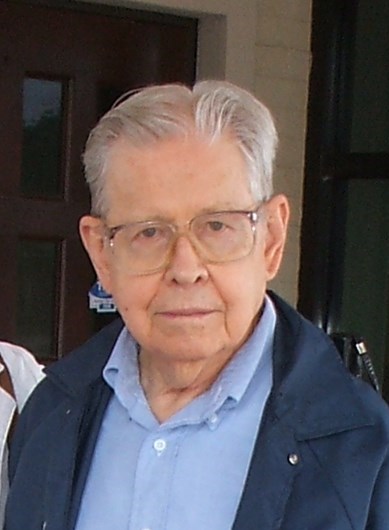 Jerald (Jerry) Stillwell Thompson was born to Harvey A. Thompson Sr. and Leona Stillwell Thompson, both deceased, at Bowie, Texas, August 15, 1923, died August 26, 2021. Preceded by sisters, Mary Frances Thompson Eickman and Betty Sue Thompson Koepp, brothers Harvey Anderson Thompson, Jr. and Robert (Bob) Ray Thompson, and several nieces and nephews. Graduated from Woodrow Wilson High School in 1941. He received his BBA from the University of Texas in 1949 and MBA from the City College of the City University of New York in 1964. He served in the Navy during WWII aboard the aircraft carrier Antietam (CV-36) in the Pacific Theater. At the University of Texas, he was National Collegiate champion in the two-mile run in 1943 and 1947, and the 5,000 meter run in 1948. He was selected All American in the two-mile run in 1943, the one-mile run and two-miles run in 1947, and the two-mile run in 1948. He was also Southwest Conference champion in cross country in 1942, 1943, 1946 and 1947. He was voted into the Texas Sports Hall of Fame in 1976, and is a member of the University of Texas Longhorn Hall of Honor, the Drake Relays Hall of Fame in 1976 and the TexStats Texas Running Hall of Fame. As a member of the Olympic team in 1948, he competed in the XIV Olympiad in London, England. He was a member of what is now the DFW Olympians and Paralympians Association.
VOIR PLUS VOIR MOINS