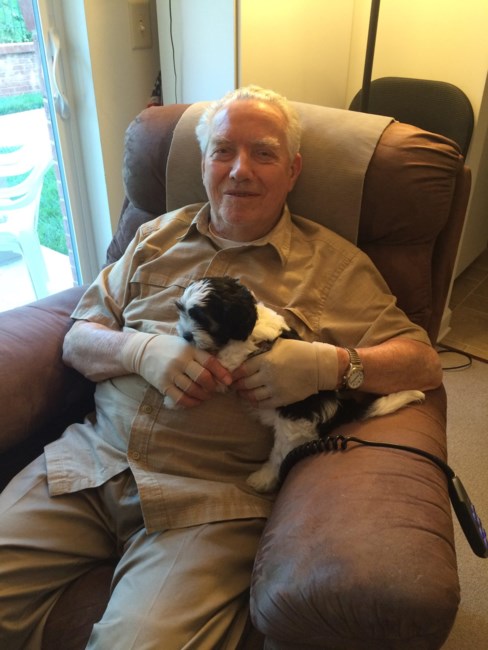 Cleveland (Cliff) Whitmore Hudgins of Fairfax Virginia passed away on Tuesday, February 18, 2020 at Dulles Rehabilitation Center. Cliff’s beloved wife of 62 years, Sue Hudgins, preceded him in death in November 2012. Additional survivors include his brother Wayne Hudgins of Newport News, VA, daughter Cathy Martin of Centreville VA, and Charlene Hemp and husband Houston of Midlothian, VA. He has three grandchildren - Gary Martin and wife Kari of Greenville, NC; granddaughters Angela Hemp MacFarlane and husband, Ryan of Midlothian VA; Sara Hemp Elliott and husband Bryan of Christiansburg, VA; and great-grandsons Joshua and Justin Martin of Greenville, NC. Additionally, he is lovingly survived by numerous nieces and nephews. Cliff was born September 21, 1923 in Newport News, Virginia to the late Karl and Ivin Hudgins. Cliff’s older brother, Karl, preceded him in death. Growing up in Tidewater, he developed a love of the water. Following graduation from high school, he worked at the Newport News Shipbuilding Yard. He loved his country and enlisted in the United States Navy during World Word II. During WW II, he served on the USS Knox and participated in amphibious landings in the Pacific Theater. He was Honorably Discharged and worked professionally as an architectural draftsman with multiple companies, retiring in 1995. In retirement he enjoyed travel and spending time with family and friends. His daughters, grandchildren, and great-grandchildren served as the lights of his life providing joy, laughter and love. He was a long term resident of Olley Glen Senior Living facility in Fairfax. Cliff will be remembered as being a man of few words, gentle natured, and patient. He had a contagious laugh and smile living life simply, humbly, and peacefully. He loved our country and one of the family’s fondest memories is taking “Daddy” out to eat with his beloved World War II Navy Veteran hat. So many people expressed their appreciation to him for his service and being part of the Greatest Generation. In lieu of flowers, the family requests donations be made in memory of Cliff to The Shepherd’s Center of Fairfax-Burke, 4019 Olley Lane, Fairfax VA 22032-1300. Additionally, Cliff’s family expresses their heartfelt appreciation to George Gallimore who became such a close friend to Cliff driving him on errands, doctor’s visits and enjoying meals together.
VOIR PLUS VOIR MOINS