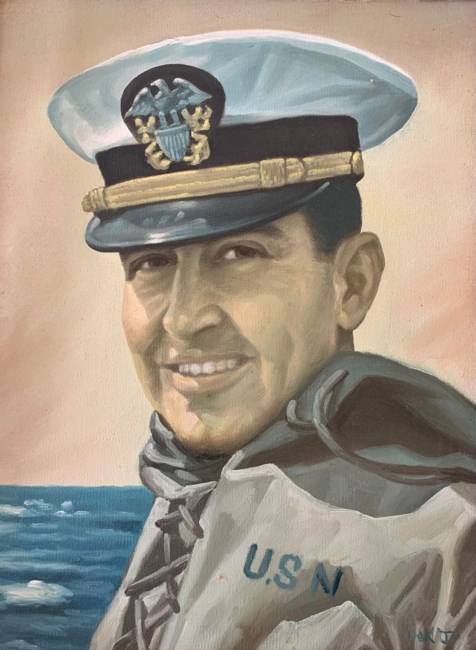 Frank Gamboa died of Parkinson’s complications following hip replacement surgery on July 8, 2021. He was 88 years old. He is survived by his loving wife of 60 years, Linda, his son Jack and granddaughter Emma, of Portland, Oregon, and his daughter Judy and granddaughter Loren, of Middleburg, Virginia. A native of Lone Pine, California, Frank was the third child of Enriqueta and Teodulo Gamboa, who fled Mexico during the Revolution. He and his 6 siblings were first generation Americans. He graduated from Lone Pine High School, attended Los Angeles Junior College, and graduated from the United States Naval Academy in 1958, in the 17th Company. He earned a Communications Engineering degree from the Navy Postgraduate School, and a Masters Degree in Government from University of Maryland. Frank was a Surface Warfare officer who served on shore duty in the U.S., as well as in Korea, Bahrain, and Panama; and on ships in both the Pacific and Atlantic Fleets. He commanded USS Fort Fisher (LSD-40) , USS Vancouver (LPD-2), and he was Commodore of the 7 ships in Amphibious Squadron 3 in the Pacific Fleet. He also commanded the Naval Communications Station Balboa, in the Panama Canal Zone. He served in the Pentagon as Deputy Assistant Secretary of Defense for Equal Opportunity. Frank retired from the Navy after 30 years of service. Frank Gamboa’s service awards include: the Defense Superior Service Medal, the Navy Meritorious Service Medal (3 awards), the Joint Service Commendation Medal (2 awards), and the Navy Commendation Medal, and several campaign and unit award ribbons. Frank served as Vice President of the USNA Class of 1958, giving generously of his time, and successfully nominated 5 members of the class of 1958 for USNA Distinguished Graduate Awards. From 1994 to 2006, he and Linda ran Gamboa International Corporation, an environmental management consulting company. During John McCain’s 2000 Presidential Campaign, Frank was a surrogate speaker and Coordinator for Veterans and POWs. Frank was often interviewed and featured in biographies in print and film for his longtime friendship with John McCain, who was his roommate at the Naval Academy and a dear friend. Frank wrote his memoir, El Capitan, the Making of an American Naval Officer, in 2011. He developed a management plan for success for future Surface Warfare Officers, through “Another Link in the Chain,” a mentorship program linking the class of 1958 with the class of 2008. He was a loyal Navy Football and ‘58 tailgate fan. Frank was a parishioner who served as an usher, and on the Senior Saints Ministries at the Church of the Holy Comforter in Vienna, Virginia. In Frank’s memory, you may wish to donate to the Naval Academy at: www.usna.com/give or to the Church of the Holy Comforter in Vienna, Virginia at: http://www.holycomforter.com/Stewardship/ If you wish to read more about Frank, here is his website: www.frankgamboa.com
VOIR PLUS VOIR MOINS