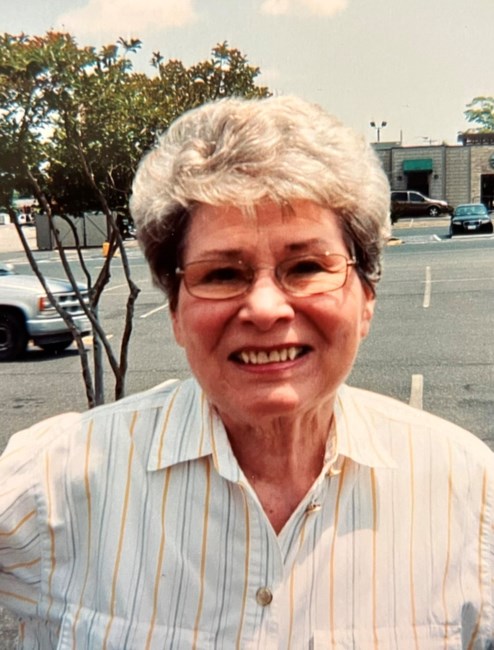 Charlotte Ann Ludwick, age 88, of Fredericksburg, Virginia passed away peacefully on Sunday, 2 October 2022 following an extended battle with COPD. Charlotte was born 16 August 1934 in Vincent, Kansas. A devoted wife and mother, Charlotte was pre-deceased by her husband Jack Wilson Ludwick to whom she was married for 38 years, her parents Jacob and Regina Pfeifer, and siblings Kiliana, Dan, Lorraine, Louise, Rudolph, Armella, Rudy, William, Cathy, and Jake. She is survived by her only son, Louis (Joan), brother Ralph (Ruth), sisters Alice and Rozanne, many nieces and nephews, and seven grandchildren – Robert, James, Katherine, Patrick, Jacqueline, Caroline, and William. Charlotte was one of 14 children raised on a family farm in Hays Kansas, where she detested herding the turkeys but loved riding Nancy the horse, playing the piano, and singing. She grew up speaking German before entering school. Charlotte left the farm and drove all over the USA in a light blue Chevy with her sister Armella to seek adventure, taking odd jobs along the way when they ran out of money before they ended up in California. She then enlisted in the Air Force as an aircraft crewmember and served close to three years before receiving an honorable discharge. She married in November 1958 and partnered with Jack as a military wife in the United States Air Force, taking leadership positions among the officers’ wives organizations as Jack rose in rank. They lived in Hawaii, Texas, Arizona, Ohio, Tennessee, Florida, and Naples, Italy. During their five years in Italy, she enjoyed traveling extensively throughout Europe, both with her family and separately, and also took up skiing. She graduated magna cum laude in 1981 from Wright State University in Fairborn Ohio. After Jack retired from the Air Force, they settled in Fredericksburg Virginia where Charlotte was a realtor with Cooper-Leedy before retiring. A Mass of Christian Burial for Charlotte will be held Saturday, 8 October 2022 from 11:00 AM to 12:00 PM at St. John the Beloved Catholic Church, 6420 Linway Terrace, McLean, Virginia. Interment will be held at a future date at Arlington National Cemetery. In lieu of flowers, donations may be made to Air Force Aid Society at afas.org. Fond memories and expressions of sympathy may be shared at www.murphy-fh.com for the Ludwick family.
VOIR PLUS VOIR MOINS