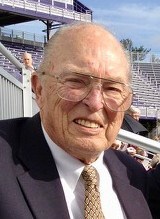 William Frederick Spicer, age 86, of Front Royal passed away on Sunday, December 24, 2017 at Lorien Columbia in Columbia, Maryland. A funeral service will be conducted on Wednesday, January 3, 2018 at 11:00 a.m. at the Front Royal United Methodist Church with Reverend Terry Clark officiating. Burial will follow in Shenandoah Memorial Park in Winchester. The family will receive friends on Tuesday, January 2, 2018 from 3:00 until 5:00 p.m. and from 7:00 until 9:00 p.m. at Turner-Robertshaw Funeral Home. Mr. Spicer was born in Culpeper, Virginia on September 14, 1931, the only son of the late William Daniel and Alma Butler Spicer. He retired from Sears as a Financial Manager, having worked in Accounting and Finance for 37 years. During his career with Sears he lived in Virginia, Pennsylvania, New York, and Illinois returning to Virginia after retirement. He became a Mason in 1960. He was a member of Front Royal United Methodist Church and served as Chair of Finance and Treasurer. He served in the USMC during the Korean Conflict and was a member of the Marine Corps League and the Devil Dogs where he served in both state and local offices. He was a member of the Front Royal Kiwanis. He is survived by his sons, Frederick A. Spicer, and James B. Spicer both of Columbia, Maryland, and his grandchildren, Jamison, Sarah, Calum and Graham. In addition to his parents Mr. Spicer was preceded in death by his wife of 48 years, D. Jo’An Stone Spicer and his daughter, Stephanie Daniele Spicer.
VOIR PLUS VOIR MOINS