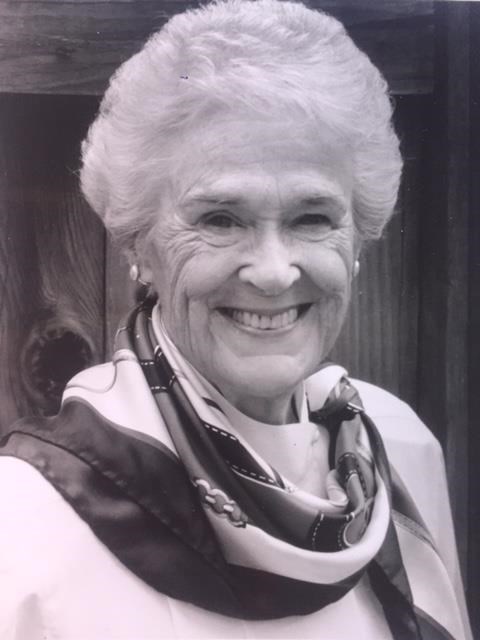 Anne Lorraine Macdonald, age 96 , of Riverside, CT formerly a resident of Bethesda, Maryland, died Saturday, November 5, 2016 in Greenwich surrounded by her loving family. Daughter of former Congressman and Mrs. Walter F. Lineberger of Santa Barbara, she graduated cum laude from Santa Barbara Girls’ School in 1937 and from Wellesley College in 1941, where she was President of College Government, a Wellesley College Scholar, a member of Phi Beta Kappa and the recipient of the Woodrow Wilson Prize in Political Science. Upon the death of her first husband, Air Force Major James Albert Saalfield, in World War II, she pursued graduate work at Akron University and was an active member of the Junior League of Akron, an officer of the Board of Trustees of Children’s Hospital, president of the Akron Wellesley Club, and chaired the History Department of Old Trail School. In 1950 she married Peter Macdonald, and they moved to Washington, DC where she continued graduate work in History at American University, served on the Board of Trustees of Wellesley College and pursued a volunteer career with the Smithsonian Institution Women’s Committee, the Smithsonian Docents Program, the Junior League of Washington, and the Hospital for Sick Children. She taught American History first at the Holton-Arms School and then at the National Cathedral School where she chaired the department of History. After retiring from teaching in 1983, she marketed an invention for which she had obtained a patent. She then began a successful writing career. Her first book, "No Idle Hands: The Social History of American Knitting," was published in 1989. Her second book, "Feminine Ingenuity: Women and Invention in America," followed in 1992. She has lectured widely on the latter subject on national radio and television programs as well as at convocations at the Library of Congress, the Inventors Hall of Fame, the United States Patent Office, several conferences of educators, and other organizations. After being widowed in 1992, she moved to Old Greenwich, CT in 1994, where she has been a member of the Greenwich Antiques Society, the Pen Women of Greenwich, the Southern Connecticut Wellesley Club, the Junior League of Greenwich, the Women’s Forum, the Bruce Museum, and The Historical Society of the Town of Greenwich, Connections, and the DAR. She has been a volunteer computer teacher with Seniornet, has volunteered in the Archives of the Historical Society, and has authored Perrot, the Story of a Library, published in 2005. Her sisters, Elizabeth Lineberger Hart, of Baltimore, MD, Janet Lineberger Partridge of Mill Valley, CA and her brother, Walter F. Lineberger, Jr. of Cleveland, OH predeceased her. She leaves five children: Anne (Lorrie) Macdonald Lorenz of Riverside, Connecticut, Janet Hite Saalfield of Santa Rosa, California; Roger Gregory Macdonald of San Francisco, California; stepsons Demarest Lloyd Macdonald of Cambridge, Massachusetts and Peter Lloyd Macdonald of Denver, Colorado; eight grandchildren; and two great-grandchildren. A celebration of her life will be held in the New Year. Online condolences may be left by visiting www.LeoPGallagherGreenwich.com
VOIR PLUS VOIR MOINS