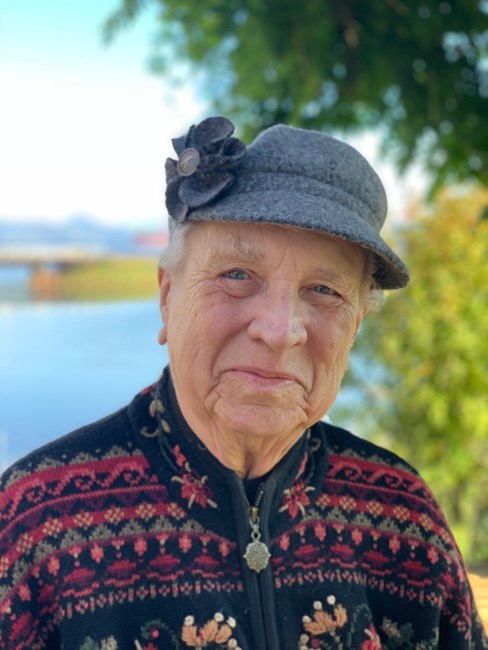 Beloved mom, grandmother, great grandmother and friend Celebration of Life service will be held, 11:00 am, Saturday, August 27, 2022 at Peace First Lutheran Church, 725 33rd Street, Astoria, OR 97103, with private committal placement at River View Cemetery, Portland, Oregon Alice Kienberger-Iverson, age 90, of Astoria, Oregon passed away on Wednesday, August 3, 2022. Alice was born June 2, 1932. Fond memories and expressions of sympathy may be shared at www.batemancarrollfunerals.com for the Kienberger-Iverson family. Alice Joyce was born on June 2, 1932 to Bertha and George Hogenson at her childhood home on their family farm in Hunter, North Dakota. Her only other sibling, Ann Marie, was eight years older than her. Due to the age difference, they had a typically vexing sibling relationship in their early years, which grew into a close and supportive bond as they aged. Their father and mother ran the local print shop in Hunter and Alice remembers spending long days there that ran into the nighttime. She remembers as a 5 or 6 year old sometimes making her bed on the large flatbed of the newspaper press when it was idle. As she grew she assumed more duties, learning to operate the Linotype machine, setting type, proofreading, and cleaning up. Alice played E-flat alto saxophone in the school band and graduated salutatorian from Hunter High School in 1950. She attended Luther College in Decorah, Iowa in 1950 and graduated in 1954. Just after beginning her second year at Luther, in September of 1951, her father died from a heart attack. Although she wanted to help her mother with the print shop, her mother sent her back to college as it was her father’s desire that his two daughters receive the highest education they could attain. After graduation from Luther in Social Sciences and Bible, Alice took a position as parish assistant in Fergus Falls, Minnesota. When she traveled home to visit her mother in Hunter, she met a young Lutheran minister who was called to develop a church in Gardner, North Dakota, and happened to be renting a room from her mother. That young minister, Walter Ervin Kienberger, fell in love with her and they were married December 26, 1954. Alice’s training as a parish assistant and musical talent was a great asset to her husband’s ministerial duties. Their first child, Jonathan, was born to them in Hunter. They soon moved to Bowdon, North Dakota where they had two more sons, Stephan and Paul. In 1962 Walt received a call to Longview, WA to start a mission congregation that became Bethany Lutheran Church. While in Longview, their fourth son, Timothy, was born. After having four sons they decided to adopt two girls, Annette and Kristine. During the years in Longview, Alice served Bethany Lutheran as choir director and organist, worked to build the youth program, served as American University Women Vice Chair, and participated in other community groups. In 1969 Walt was called to Portsmouth Trinity Lutheran Church in Portland, Oregon and the family moved once again. Alice served off and on again as choir director and organist. She entered the Masters in Library Science program at University of Portland and, after graduating in 1972, took a position with Judson Baptist College as head librarian. Walt accepted a call to St. Georg Kirche in Braunschweig, Germany in 1978 and Alice and the three youngest children, Tim, Annette, and Kris began a new adventure abroad learning to negotiate in another language and culture. The German congregation quickly embraced Alice, who was active in all aspects of congregational life. In 1984 the family returned to the States. While Walt interviewed for positions in the Lutheran Church Alice remained with the children in Portland. Then in 1986, Walt passed away and Alice took a job at Academic Books to support the family, until receiving the appointment of Librarian for Warner Pacific College in 1987. One of her highlights in this position included introducing computers to the College Library. Meanwhile, she welcomed time with her growing family that now included grandchildren and stayed in touch with friends. On May 5, 2001 Alice married Melvin Iverson and, in 2002, she retired from Warner Pacific. Mel and she loved to travel and took trips to Switzerland, Australia, New Zealand, and Italy in addition to visiting their children living in the Western States and various countries abroad. Between 2003-04 Mel and Alice built a home in Astoria and began to transition to Astoria before moving permanently to Astoria in 2011. With Mel, Alice became involved in supporting the Scandinavian communities of the Pacific Northwest. She was a member of Vasa Nobel Lodge, served as District 13 Grand Master from 2005-2011 and continued as Grand Lodge Historian working with her good friend Bernice Pearson as co-historian for the Vasa Grand Lodge. This summer before her passing she was awarded the Distinguished Service Award for her work on the Vasa Order of America 125th Anniversary Book as well as the many additional ways that she had supported the advancement of Swedish heritage in the district and local lodges. Alice was always a strong and faithful member of the various Lutheran churches and organizations where she lived. She served on the council and as president at Central Lutheran and Resurrection Lutheran Churches in Portland, Oregon. After relocating to Astoria she was a member of First Lutheran Church and served on various committees, the church council, and as council president. With the merger of Peace and First Lutheran, Alice continued to serve on the memorial committee and found an exciting new opportunity to be a founding member of the Anti-racism Team and librarian for the Anti-racism Library of Peace First Lutheran. Alice was always seeking to expand her knowledge of the Bible, deepen her faith, and love others through serving. She is survived by her children and their partners Jon (Lucy), Steve, Paul (Traci), Tim (Angela), Annette (Kevin), and Kris; her grandchildren: Jessica (Sheldon), Matthew, Patrick, Hannah (Cole), Elsa, and Anna, and her great grandchildren, Joey, Tyler, and Elsie.
VOIR PLUS VOIR MOINS