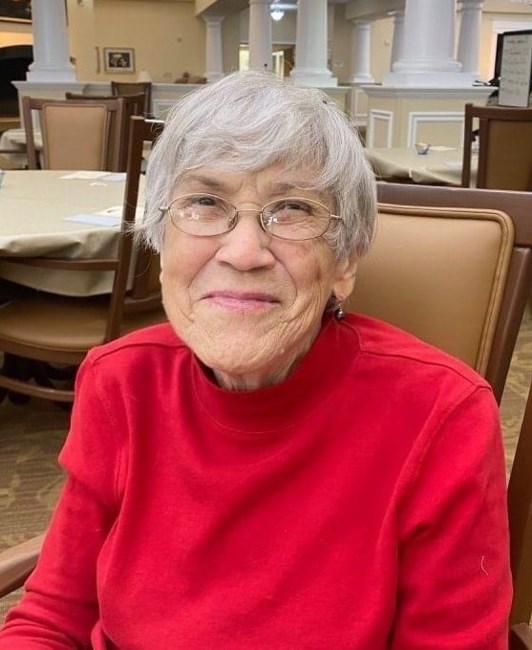 Hallie Marie Nicholas Bellotte, 88, of Shreveport, Louisiana, passed peacefully to her heavenly home on Thursday, July 28, 2022. Visitation will be at Hill Crest Memorial Funeral Home in Haughton on Friday, August 5, 2022, 5-7 pm. Funeral services will be on Saturday, August 6, 2022, at 10 am, also at Hill Crest. Hallie was born on June 24, 1934 in Avery, TX to Homer Nicholas and Hallie Marie Davis Nicholas. She married the love of her life, Wilton Leo Bellotte, on March 24, 1956. She received her BS in Nursing from Northwestern State University in 1956. She worked for the VA Hospital in Shreveport for 27 years, where she won the prestigious “Hands and Heart” award on November 15, 1983. Hallie and Leo were among the founding families of Bellaire Baptist Church, where they spent many years working in the nursery and serving the Lord. Hallie showed God’s love through every aspect of her life. She and Leo loved spending time at the family farm in Avery, Texas, a love which they passed on to their children and grandchildren. She was affectionately called Lady by her children and was beloved Grandlady to her grandchildren. Hallie loved her family and friends fiercely, and she will be greatly missed. Hallie is survived by her five children, James Edward Bellotte (Joy) of Haughton, Daniel Lynn Bellotte of Annona, Texas, Steven Leo Bellotte (Tammie) of Farmersville, TX, Anna Marie Stovall (Tony) of Avery, TX, and Paul Nicholas Bellotte (Angie) of Bossier City. She is survived by her grandchildren, Rachel Korodan (Aaron), Nathaniel Leo Bellotte (Elizabeth), Bryan David Bellotte (Katrina), Amy Bellotte, Eric Bellotte (Savannah), Elizabeth Bellotte, and Hannah Bellotte. Hallie is also survived by her great grandchildren, Daxton, Abigail, Delaney, and Emmelyn. She is survived by one brother-in-law, Danny Bellotte, and a host of nieces and nephews, and many, many friends. Hallie was preceded in death by her parents, her husband of 59 years, and her siblings, Homer D. Nicholas, Edward R. Nicholas, and Virginia Fay Nicholas Seman. She was also preceded in death by her granddaughters, Jennifer Nicole Bellotte and Sarah Anne Lollar. Pallbearers will be Nathaniel Bellotte, Bryan Bellotte, Eric Bellotte, Aaron Korodan, Steve Bellotte and Paul Bellotte. In lieu of flowers, donations may be made in her memory to Holy Angels, Shreveport, (www.laholyangels.org) or St. Jude Children’s Research Hospital in Memphis, TN (www.stjude.org).
VOIR PLUS VOIR MOINS