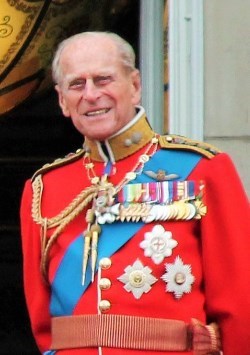 Prince Philip, the Duke of Edinburgh and Queen Elizabeth’s longtime husband, died April 9, 2021. He was 99. Prince Philip, Duke of Edinburgh, Earl of Merioneth and Baron Greenwich, also called Philip Mountbatten, was the longest-serving royal consort in British history. Philip was born on the Greek island of Corfu on June 10, 1921, and was the fifth child and only son of Prince Andrew of Greece and Denmark and Princess Alice, the oldest daughter of the former Prince Louis of Battenberg. While Philip’s family was not Greek, they were descendants of a royal Danish house that European powers had put on the throne of Greece at the end of the 19th century. Philip was the sixth in line to the Greek throne. Through Princess Alice’s lineage, Philip was also the great-great-grandson of Queen Victoria, just as Elizabeth is Victoria’s great-great-granddaughter. Both were great-great-grandchildren of George III, who presided over Britain’s loss of the American colonies. A year after Philip was born, Philip’s uncle, King Constantine of Greece, was overwhelmed by the Turks in Asia Minor, now part of Turkey. Prince Andrew, Philip’s father, was then banished by a revolutionary Greek junta. As an infant, Philip was smuggled out of Greece in a fruit crate as his father, eluding execution, found refuge for his family in Paris, where they lived in straitened circumstances. When his parents separated, Philip was sent to live with his grandmother, the Dowager Marchioness of Milford Haven, who was also the granddaughter of Queen Victoria. For four years, Philip attended the Cheam School in England, an institution bent on toughening privileged children. He then attended the Gordonstoun School in Scotland, which was even harsher than the previous school, and promoted a grueling regimen of hard work, cold showers and hard beds. Philip sent Charles to both schools to have him follow in his footsteps. Philip developed a love of the sea while at Gordonstoun, learning seamanship and boatbuilding. He seemed destined to follow his Mountbatten uncles into the British Navy. In 1939 Philip entered the Britannia Royal Naval College at Dartmouth, where he was honoured as the best all-around cadet of his term. The following year, with Britain at war, 19-year-old Philip served on the battleship Ramillies as a sub-lieutenant. He was later transferred to the battleship Valiant. In June 1942, Philip was promoted to lieutenant and took part in the Allied landings in Sicily in July 1943 before sailing for the Pacific campaign. There he served alongside his uncle Louis, Lord Mountbatten, who was then the supreme allied commander in Southeast Asia. When the Japanese formally surrendered on Sept. 2, 1945, Philip was aboard the United States battleship Missouri.
VOIR PLUS VOIR MOINS