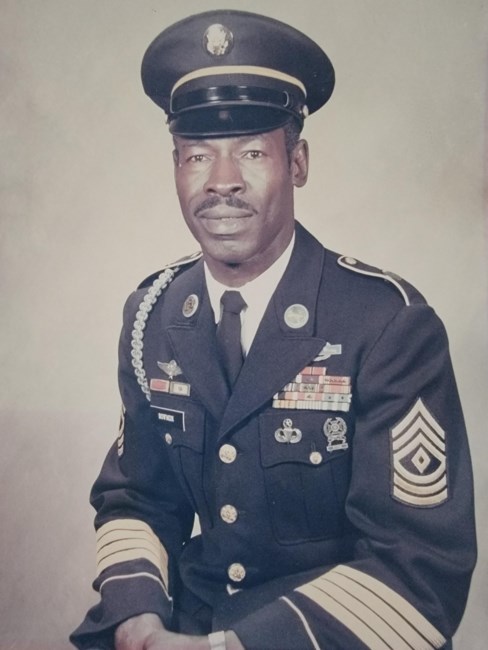 First Sergeant Will W. Bowmon, Retired, age 98 (a former resident of Clarksville, Tennessee) lived in Houston, Texas until his passing on Friday, January 21, 2022, at Autumn Leaves of Cypresswood Memory Care. Will entered this life in Elizabeth, Louisiana on July 14, 1923, born to the late Will Gurley Bowmon and Mammie Pearce Bowmon. He was the only boy in a family of eight (8) siblings. He was a Veteran of the United States Army who served in World War II, the Korean War, and the Vietnam War. During his 29 years of honorable service, Will was a well decorated and heroic soldier. The Purple Heart and Bronze Star were among his medals awarded for valor and meritorious service. He married Hisako Kamitanaka in 1956 in Fukuoka, Japan. In 1974, when he left the Army at Ft. Knox, Kentucky, Will continued his working career as a truck driver, a tool and dye operator, and ending in the field of civil service at Ft. Campbell, Kentucky. While transitioning into retirement he devoted most of his time organizing two chapters for the 555th Parachute Infantry Association, also known as “The Triple Nickle.” The Elester Garner Chapter in August 1982, and the Blue Grass Chapter in August 1995. He was invited to become a member of the Retirees’ Health Care Committee appointed by the Clarksville-Montgomery County Commissioner of Military and Veterans Affairs in Tennessee in 1989. In 2003, Austin Peay State University’s ASPIRE posted an interview with Will Bowmon conducted by McNeely. In 2005, when Will and Hisako moved to Houston, Texas to be closer to their children and grandchildren, he volunteered and participated in various programs offered by the Visual Impairment Services Outpatient Rehabilitation (VISOR) at the Michael E. DeBakey VA Medical Center. He was preceded in death by his parents and seven (7) sisters. Will was a devoted and loving husband, father, and grandpa. He was known as “Gigi” to his great-grandchildren. He leaves behind to cherish his memories his wife Hisako L. Bowmon of 65 years, daughters, Mutsuyo B. Royster (Gary), of Ewa Beach, Hawaii, Kathyrine B. Davenport (Michael), and Lisa B. Hunter of Houston, Texas. Grand children Gary Royster II (Amanda), Christopher Davenport (Danitra), Brandon Hunter (Ashley), Lauren Davenport, and Terrell “TJ” Wallace. Great-grandchildren Micah, Addison and Kaleia Royster, Jeremy and Collin Davenport, and Kylie Venson. The Bowmon family will receive visitors at the chapel of American Heritage Funeral Home in Houston, Texas on Thursday, February 3, 2022, at 5:00 pm until 8:00 pm with a Celebration of Life continuing Friday, February 4, 2022, at 10:30 am until 12:15 pm with Reverend Calvin Davenport of Beaumont, Texas officiating. Burial with full U.S. Military Honors and a special tribute by the KCHS AFJROTC will follow at the Houston National Cemetery beginning promptly at 12:30 pm until 1:00 pm. Pallbearers will be Gary Royster II of Knoxville, Tennessee, Christopher Davenport, Brandon Hunter, Terrell Wallace, Gerald Mitchell, and Oliver Lewis of Houston, Texas. Honorary Pallbearer is Antonio Rucker of Chicago, Illinois. Fond memories and expressions of sympathy may be shared at www.AmericanHeritageFuneralHome.com for the Bowmon family.
VOIR PLUS VOIR MOINS