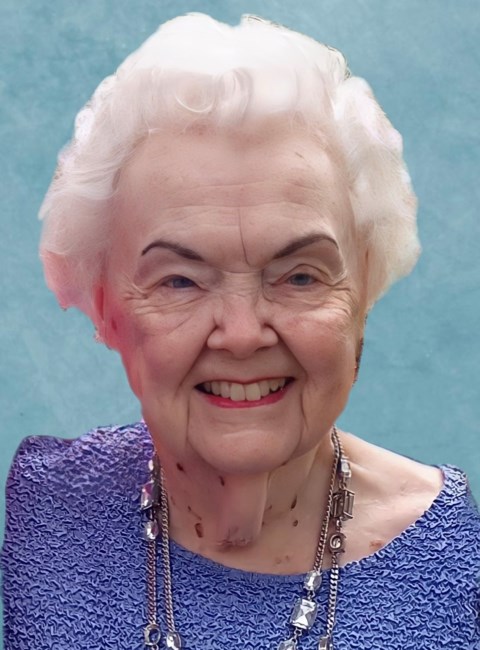 With earthly sadness but heavenly rejoicing, the family of Patricia (“Patty”) Weaver Lawrence announces that she passed away peacefully on May 5, 2022 after a sudden illness. Patty was born in Jackson, Tennessee on March 8, 1928 to Walter McDonald Weaver and Elizabeth Watt Weaver. She graduated from Jackson High School and attended Rhodes College (formerly Southwestern University) for two years. In 1952, she married the love of her life, William Stewart Lawrence. They recently celebrated 70 years of marriage. Patty was active in Presbyterian Women, Jackson Service League, PEO, Mutual Improvement Club, Bal Masque, Quid Nunc Book Club, and Mary Anna Ashby Milk Fund. She was recently acknowledged on 75 years of membership in Chi Omega Fraternity. Patty was a founding member of Old Hickory Academy Mothers’ Club (currently University School of Jackson). Patty was committed to First Presbyterian Church. She joined the church at age 10, making her the longest active member until her death. Patty had many gifts and blessings which she generously shared with everyone she encountered. She is most remembered by those who knew her for her gifts of graciousness and Southern hospitality. But above all, her deep Christian faith has touched and influenced countless lives. Patty was preceded in death by her parents and brother, Walter McDonald Weaver, Jr. She is survived by her husband, Bill, and her four daughters Lynn (Jimmy) East of Bells, Lucy Taylor of Knoxville, Sally Jones of Jackson, Mississippi, and Amy (Charles) Walton of Mobile, Alabama. She will be remembered as “Nonny” by her seven grandchildren: Elizabeth (Adam) Nunley, Allison (Drew) Moore, Will (Shelby) East, Caitlin (Ben) Littlejohn, Rachel Walton, Emma Walton, and Luke Walton. She was also a proud great-mother of eight: Miller, Lucy Kate, Walter, Ayden, Wesley, Anna Craig, Smith, Wallace and another great-grandson due in July. The family laid her to rest at Taylor Cemetery on Mother’s Day, May 8, 2022. A memorial service will be held at First Presbyterian Church on May 22, 2022 at 2:00 p.m. In lieu of flowers, the family requests donations to Hollywood Cemetery, First Presbyterian Church or your favorite charity. Fond memories and expressions of sympathy may be shared at www.GeorgeASmithandSons.com for the Lawrence family.
VOIR PLUS VOIR MOINS

The Celebration of Life