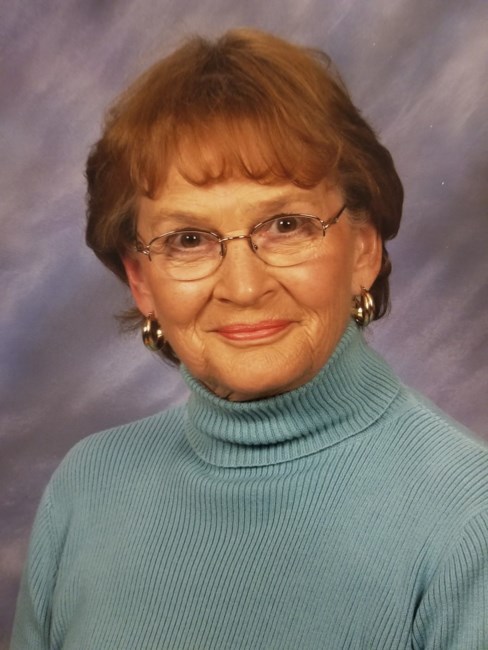 Harriet L. Palis Hafley Harriet ran to the loving arms of Jesus on Monday, January 17, 2022. She is now with her husband, parents, sister, friends, and her pets. Harriet Leah Palis Hafley was born on July 30, 1934 in Kansas City, MO to Lloyd Herman Palis and Helen Katherine Nims Palis. Harriet grew up in Kansas City and attended Blenheim Elementary and Southeast High School, where she was very social and a part of many clubs and groups. While at school, she found she had an amazing talent for art, which showed throughout her life from designing family Christmas cards and cheerleading logos for her daughter’s squad to spending time with her grandchildren drawing all sorts of animals and characters. She also made lifelong friends at school, some of which she still saw, and was in contact with, up until her passing. Those are 80+ year friendships which many people cannot say they have experienced. After graduation in 1952, Harriet attended Kansas City Junior Collage and attained her Associates Degree, then she obtained her degree from UMKC for a Bachelors of Science from 1971 in Medical Technology. Harriet met her husband, David Lee Hafley, in high school but didn’t start dating him until after high school and after his stint in the Marine Corps. They dated for a short period of time before getting married on September 7, 1957. Soon after they welcomed their son, Daniel, in 1958 and then their daughter, Amy, in 1960. The family moved to Minneapolis, MN and then to Portland, OR for David’s job before returning to Raytown in 1966, where she lived until moving to Kansas City in 2005. Harriet’s final few months were spent at Addington Place in Lee’s Summit, MO. Harriet began her career in medical technology landing a position with the Jackson County Hospital, which until recently was called Truman Medical Center - Lakewood. Over her time at TMC - Lakewood, Harriet managed the hospital’s laboratory. She loved her job and she was good at it! As the hospital was a teaching hospital, Harriet had the opportunity to work with all hospital staff, including new doctors, some of whom remained friends with her to this day. Harriet officially retired from TMC-Lakewood in 2004. Harriet lived her life for her children and for others. She was a Cub Scout den mother, a seamstress who made a lot of her daughter’s clothes from kindergarten to her wedding dress, she was on the Southeast High School Reunion Committee for many years, she was a proud member of the Raytown Historical Society Board, and a few book clubs and bridge groups. Harriet loved board games and card games. She was an honored member of her grandson Drew’s group of friends, who have fond memories of her hosting game nights at her house. She loved crossword puzzles and any other type of game challenge. Harriet enjoyed her retirement by vacationing to Alaska and throughout Europe and traveled to Florida, Texas and Arizona to visit friends. She lived a full and wonderful life filled with family, friends, and activities. We celebrate her, her kindness, and her loving gentle nature. She certainly was a special lady. Harriet was preceded in death by her parents, husband, sister, dear friends and numerous pets. She is survived by her son and daughter-in-law, Dan and Connie Hafley of Kansas City, MO, her daughter, Amy Engle of Fort Worth, TX, her granddaughter and family, Cara and Shawn Porter of Lee’s Summit, MO, her grandson and family, Drew and Karlie Engle of Kansas City, MO, her grandson, Sam Engle of Chicago, IL, her three precious great-grandchildren Lilly and Will Porter and David Engle, two nieces, Gayle and Teresa, and a nephew, Bob. She also leaves her former son-in-law, Darin Engle of Kansas City, KS, with whom she shared a special bond. Last but not least, her faithful and loving cat, Oliver, who never left her side. Harriet’s wishes were to be cremated. Services and visitation will be held Tuesday, January 25, 2022. Wine and Hors o’dourves will be served from 2-3pm followed by a Memorial Service from 3-4pm at Newcomer’s Floral Hills Funeral Home, 7000 Blue Ridge Blvd, Kansas City MO 64133.
VOIR PLUS VOIR MOINS