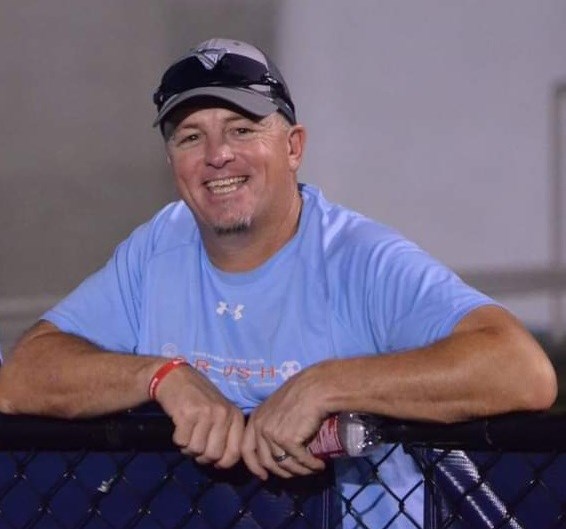 Tommy R. Eggleston, age 52 of Knoxville, TN, peacefully departed this life on Thursday, August 4, 2022. Tommy was born on November 2, 1969 in Lexington, NC to James Curtis and Della Lou and grew up with his older sister, Kathy, and younger sister, Audrey. Growing up, Tommy was involved in numerous sports but basketball was his first love, which included his fandom of his beloved University of North Carolina Tar Heels. Besides sports, Tommy was always active. He loved being outdoors, whether it was hunting, fishing, or just being rowdy and driving his parents crazy. In 1993 Tommy decided to visit Florida on vacation and he loved it so much he decided to make it his new home. That was one bold decision, but his next decision could have been considered idiotic, which was his chosen profession as a roofer… in FLORIDA. But of course he succeeded and eventually worked his way up to Operations Manager. But honestly the best thing that happened to Tommy while in Florida occurred in 1996. Tommy met his future wife, Paula, while they were both cutting a rug at the Rockin’ Ranch in Ormond Beach, FL. They fell in love and Tommy instantly became responsible for two young boys, Vic and Ryan, who he always viewed as his own. Tommy was an amazing example of a man and was the rock for Paula as she battled a brain tumor in which she had to re-learn how to talk, walk, and even feed herself. But through it all, Tommy never complained, and it only made his devotion to Paula, Vic, and Ryan even stronger. And that meant him uprooting his life and moving to Knoxville. Soon after, Paula and Tommy were married in June 2000. Shortly after that, Tommy and Paula welcomed their third child, a daughter Katie, who was truly the apple of his eye. In 2005, Tommy began a 17-year career at Tennessee Valley Authority which included contractor roles first as a heavy equipment operator, and then full time as a Material Handler and Material Handler Foreman. Over the years, he was able to support John Sevier, Kingston, and Bull Run Fossil Plants. Tommy’s co-workers described him as a hard worker who truly cared about the role he played and his willingness to always answer the plant’s needs, even after hours, without complaining and generally with a smile on his face or at least a smirk with a funny comment to go with it. In his spare time, Tommy enjoyed playing softball, golf, basketball, watching UNC basketball, Vols football, and the Cincinnati Reds (no matter how bad they were). For those that knew Tommy, even for a little while, it did not go unnoticed that he was a one-of-a-kind guy with a special sense of humor, a tremendous work ethic, a true commitment to his family, and someone with a never-ending desire to improve his golf game. Tommy will be missed everyday by his family, friends, and co-workers. Those missing Tommy greatly includes his wife Paula, sons Vic (Miranda) and Ryan, daughter Katie, sister Kathy, grandchildren Manny and Leo, mother and father-in-law Sandy and Bill, sister and brother-in-law Jessica and Ryan, his nieces and nephews, Tasha, Mitchell, Brandon, Autumn, and Sydney. In addition, we want to recognize the entire Eggleston, Burgess, Donathan, and Thomason families, who are too many to list separately. Tommy was devoted to his faith and knew that he would be greeted in heaven by his mama, daddy, and sister Audrey, as well as many other loved ones. Paula, Vic, Ryan, Katie, and the entire family is eternally grateful for the love and support given to Tommy throughout his life and especially in this past 6 months. We would especially like to thank his coworkers at Kingston and Bull Run for their generosity and support and all the friends, family, and neighbors whose care and unwavering support surrounded our family in love during this difficult time. The family will receive friends on Wednesday, August 10, 2022 between 5:00pm – 8:00pm at Berry Highland West, 9913 Sherrill Blvd, Knoxville, TN. Funeral services will take place on Thursday, August 11, 2022 beginning at 10:00am. Fond memories and expressions of sympathy may be shared at www.BerryHighlandWest.com. Please share your memories and stories of Tommy with us. They help to bring comfort during this time.
VOIR PLUS VOIR MOINS