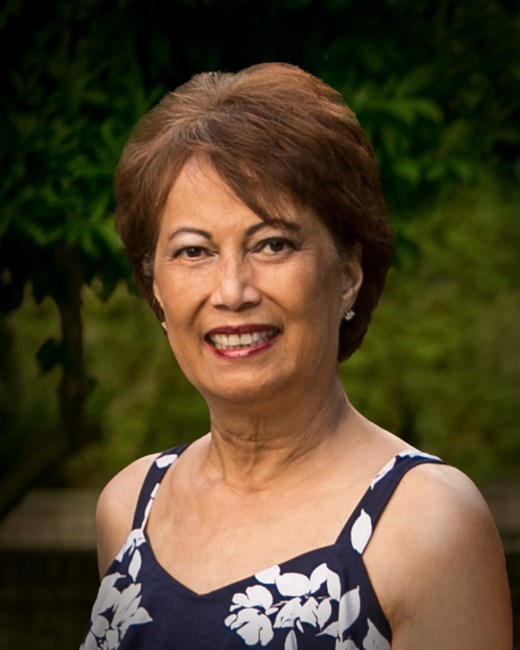 Erlinda (“Linda”) Urbayan Calderon, 70, of Las Vegas, Nevada, passed away on December 24, 2020. She was born on October 11, 1950 in Tacloban City, Leyte, in the Philippines. Linda graduated high school with honors in 1968 from Divine Word University in Tacloban City. She served as class president. After high school, she spent a year as a Rotary International Exchange Student in Australia. Linda went on to study nursing at the University of Santo Tomas in Manila and graduated in 1974. During her sophomore year, she pledged the Beta Gamma Phi confraternity. It was during her pledge year in 1971 when she met Herminio Calderon. The two married on February 16, 1975 at Sacred Heart Church in Manila. In 1976, Linda immigrated to the United States to accept a nursing position at Jackson Park Hospital in Chicago. Her husband and daughter Elaine followed and the family moved to Detroit, Michigan. By the early 1980s, they were residents of St. Clair County. Linda designed the family’s home along the St. Clair River where they would reside for the next 30 years. After a career in nursing, Linda focused on raising the couple’s daughters Elaine and Rachel. She was a community leader and philanthropist. She served as President of the St. Clair County Medical Alliance and the Auxiliary of the Philippine Medical Association of Michigan. Linda was chairwoman of the American Heart Association Heart Ball in St. Clair County. For 10 years, she organized medical missions to the Philippines, providing free medical and dental care to thousands of impoverished Filipinos. She received recognition for her service, leadership, and fundraising efforts. Linda played golf and tennis as a member of the Port Huron Tennis House and St. Clair Golf Club. She traveled to 75 countries, played golf in some of the world’s top golf courses including Pebble Beach and St. Andrew’s. She had an appreciation for gardening, live performances, and Broadway theater. Linda enjoyed her years as a grandmother traveling to see her grandchildren every few weeks and inviting them to see the world with her. Erlinda is survived by her husband of 45 years, Herminio Calderon, daughters Elaine Calderon and Rachel Young (Justin), grandchildren Tyson and Vivienne Young, siblings Teodoro Urbayan, Jr., Delia Urbayan, Amelia Timbol, Carolina Manlapaz, Elizabeth Sines, Susan David, Cesar Urbayan, several nephews and nieces. She was preceded in death by her parents Teodoro Urbayan, Sr. and Dionisia Soledad and her sister Lourdes Delloro. Visitation is scheduled for January 3, from 1-3pm and 5-7 pm at Palm Southwest Mortuary in Las Vegas, Nevada. A Celebration Mass is scheduled for January 4 at 2pm at Holy Spirit Catholic Church in Las Vegas, Nevada with Rev. William J. M. Kenny as the celebrant. Receptions will be held at Siena Golf Club. Donations may be made in Linda’s memory to the Multiple Myeloma Research Foundation and the Leukemia Lymphoma Society.
VOIR PLUS VOIR MOINS