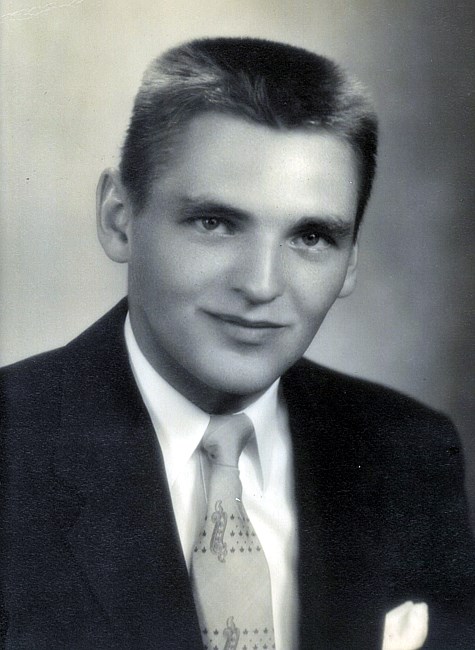 Billy Lee Sterling, 83, of Liberty, MO, passed away July 21st at Liberty Health and Wellness. A visitation will be held from 10:00-11:00am, Tuesday, July 26th at Church Archer Pasley Funeral Home, 119 E. Franklin St., Liberty, MO; with funeral services to follow at 11:00am all at the funeral home. Interment will follow in the Providence Baptist Church Cemetery, 12206 N Stark Ave, Kansas City, MO 64167. In lieu of flowers, contributions may be made to the Providence Baptist Church Cemetery Association. Billy was born July 29, 1928 in Liberty, MO to John and Bertie Sterling. After his mother’s untimely passing, he was raised by his aunt and uncle, Emma and Woody Thomas. Billy graduated from Liberty High School in 1956 and married the love of his life, Janet Dillon, on October 25, 1958. They raised three children in the Liberty area. He worked for Lake City Ammunition, Ford Motor Company, and retired from Certain-Teed Fiberglass in the early 2000s. Billy played baseball in his early years and sang in a band. He also enjoyed going to the boats to gamble a bit. He was preceded in death by his birth parents as well as his adoptive parents; his son, Jeff Sterling; and his adoptive siblings, Jack, Pauline, Colleen, and Lou. Billy is survived by his wife of 63 years, Janet Sterling; his sons, Gregg Sterling, and Michael Sterling (Noelle); his granddaughter, Melissa Hill (Aaron); his great-granddaughter, Delaney Hill; his former daughter-in-law, Ginny Dobbs; and his adoptive sister, Jean Burgess; as well as other relatives and friends. Fond memories and condolences for Billy may be left at www.churcharcherpasley.com, as arrangements are under the direction of Church Archer Pasley Funeral Home, 119 E. Franklin St., Liberty, MO, 816-781-2000.
VOIR PLUS VOIR MOINS