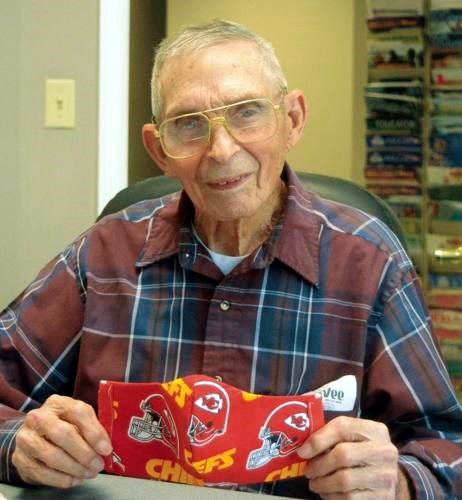 On Thursday, August 25, 2022, William Lee Conley passed away at the age of 101. A funeral service will be held at 11 am, Friday, September 9 at St. Andrew the Apostle Catholic Church in Gladstone, Missouri, with burial following at 1:00pm at the Missouri City Cemetery, Liberty, Missouri. In lieu of flowers, he has requested memorial contributions to St. Andrew the Apostle Catholic School, 6415 N Antioch Road, Gladstone, 64119. Known to his friends and family as Bill, W.L, or Uncle Bus, he was born outside of Liberty on September 19, 1920 to Everett Daniel Conley and Evalena Davis. He attended Sharp and Birmingham Schools until he graduated at 14. He worked on a farm until drafted January 1945, serving in Saipan and Guam. Upon his return from WWII, he worked for Liberty Pride. After attending refrigeration and electrician school, he worked for Crosley Refrigeration until 1969, then for a weigh scale company until his retirement at age 71. In 1964 Bill married Clara Vitt, and they were married for 39 years until her death in 2003. During retirement Bill stayed busy maintaining the farm and home until a short time before his death. He stayed busy and felt exercise was important for living a long life. He also loved visiting with friends and family and maintained several standing lunch appointments. In addition to his parents and wife, he was preceded in death by his brothers Dan, John, and Ralph, his sister Anna, and a niece. He is survived by several nieces and nephews and great-nieces and nephews who have enjoyed his company, stories and sense of humor throughout his lifetime. Arrangements: Church Archer Pasley, 816-781-2000
VOIR PLUS VOIR MOINS