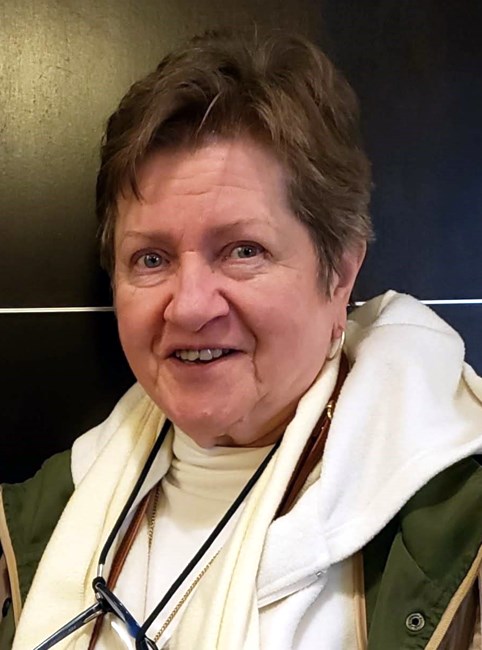 Carol Ann (Petrosky) Dillard, age 75, of O'Fallon, Illinois passed away on Sunday, January 16, 2022. She was born on February 21, 1946 in Detroit, Michigan to Constantine and Martha (Zilz) Petrosky. Carol was baptized by Pastor Gold in March of 1946 and also confirmed by Pastor Gold on Palm Sunday in March of 1959 at West Bethlehem Lutheran Church in Detroit. She attended elementary school at West Bethlehem Lutheran School from 1951-1959, Lutheran High School West from 1959-1963 and Virginia Farrell Beauty School in Detroit from 1963-1964. During her childhood she could be found ice skating in the backyard of 1110 Livernois, enjoying family picnics, trips to Bob-Lo Island and roller skating on the sidewalk. Throughout the years Carol was employed as a clerk at Woolworths in Detroit in 1964, retired after 38 years from her position as a group assistant at NBD/Bank One (1965-2004), was a floral designer and cashier at Dierbergs in Shiloh, IL. from 2005-2017 and was a breakfast assistant at Drury Inns in Shiloh, IL. from 2006-2009. She also worked as an Avon representative for 48 years. Carol married Tommy Eugene Dillard, whom preceded her in death in 1974. Together, for nearly a decade, they raised their 3 sons; Brian Gene Dillard (Sherry), Richard Scott Dillard (Stacey), and Christopher James Dillard (Amy), spending as much family time together with older siblings, Duane (Jocelyn), Linda, Betty (John), and Tom (Sarah). She was the beloved grandmother of Beau (Emily), Ashton (Robin), Joshua, Jenna, Patricia, Kaitlyn (Joe), Jordan, Layla and Jonathan (Cortney) as well as loving great-grandmother to Gracyn, Ambellina, Briella, Lorelai and Henrik. Besides her husband, she was preceded in death by her siblings; her brother, Kenneth Petrosky (2020) and her sister, Linda Petrosky (2017). She was especially proud of her children and their accomplishments, and extra proud of becoming a grandmother and great-grandmother. She enjoyed floral arrangements (her favorite being cream and light pink flowers) golf, food, salvation through the finished work of Jesus Christ and spending time with her family. She will be dearly missed.
VOIR PLUS VOIR MOINS