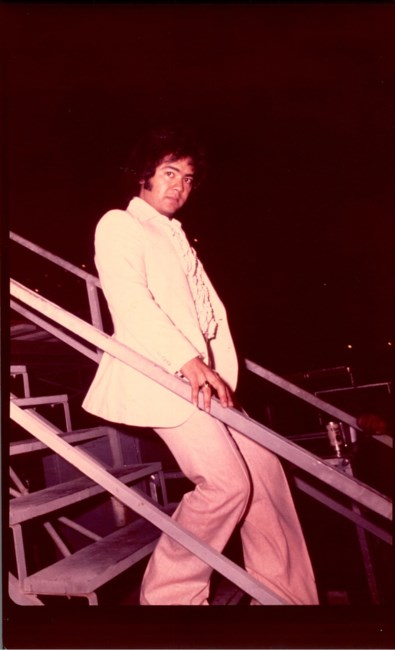 SANTA MONICA, CA, November 20, 2021—Billy Hinsche, best known as a member of the 1st Boy Band - rock group Dino, Desi & Billy - and a touring musician with The Beach Boys, passed away suddenly on Saturday after a brief bout with lung cancer. He was 70.

Billy was born in the Philippines, on June 29, 1951, to proud parents Celia Bautista Hinsche and Otto “Doc” Hinsche. ‘Doc’ went to the Philippines in the 40’s as a civilian, was imprisoned for 3 years by the Japanese in World War II, and somehow survived. He then opened up a Casino in Manila, named it The Riviera, & a short time later met his future Filipina wife. They married, had 2 children, (Annie & Billy) & began to make plans to move to America. Doc had dreamed of living in sunny California - Beverly Hills to be exact…where he could get away from the cold winters, & the snow & slush of NYC. The ship, The SS President Cleveland, brought the family to the United States after 31 days on the high seas. Now living in the heart of the movie colony, Billy was exposed to the world of entertainment at a young age. In 1955, while visiting the set of The King And I with his mother, he was offered a part in the film but was too shy to run through Yul Brenner’s legs! 1957, with Walt Disney watching at his famed amusement park, Billy and his sister Annie walked in the Disneyland International Parade of Nations, dressed in traditional costumes, representing the Philippines. At age 7 Billy appeared as a swimming “water baby” on The Ed Sullivan show along with America's aquatic sweetheart, Esther Williams. Billy had a lifelong love for baseball fostered by his father, and the Brooklyn Dodgers… In 1963, he and his Little League team, the Tigers, played against his future bandmates team, the Yankees, with Dino Martin pitching, Billy at 1st base.

Music was a part of Billy’s life from the very beginning. He began playing piano at the age of 5, violin at 7, ukulele at 10 and guitar at 12. He attended Good Shepherd Elementary School, where he met fellow classmates Desi Arnaz, Jr. and Dean Paul Martin. They soon found their musical interests and talents were growing and blending…hence DD&B was born. They grew more proficient, & soon they soon began writing or co-writing and producing their own songs. Billy on lead guitar; Dino, son of Dean Martin, on bass and Desi, son of Lucille Ball and Desi Arnaz, on drums. Frank Sinatra was called to see if the boys could audition for him in Deans living room. and Dean Martin in Lucy’s living room. It went well, & soon they signed a recording contract with Sinatra’s Reprise Records. The trio had a string of hits including “I’m A Fool” and “Not The Lovin’ Kind” and became the preteen heartthrobs of the middle to late '60s, appearing monthly in 16 Magazine. They were the youngest group ever to have hit records and the only group to have a Filipino/American boy (Billy) as a teen heartthrob.

Dino, Desi & Billy recorded four albums for Reprise, toured extensively throughout the U.S. and Canada, performed on all the popular television shows of the era and appeared on screen with Dean Martin and Ann Margaret in the Matt Helm spy comedy Murderer’s Row, singing their hit “If You’re Thinkin’ What I’m Thinkin.”

As the 1960s ended, Dino, Desi & Billy disbanded. In August of 1969, Billy was asked to formally join The Beach Boys. He declined in favor of continuing his college education. He graduated in 1974, earning a B.F.A. in Motion Pictures and Television from the University of California, Los Angeles School of Theater, Film and Television. That same year, he accepted an offer from The Beach Boys to join the band as a touring musician. He would go on to perform and record with the legendary group for three decades, appearing in every major venue in the world including the Hollywood Bowl, Madison Square Garden, Carnegie Hall, and Wembley Stadium in England. He was honored to play for 4 U.S. Presidents.

Billy toured with the Carl Wilson Band in the early '80s and the Brian Wilson Band in 2007, 2016 and 2017. He was Musical Director for Beach Boy Al Jardine's Endless Summer Band as well as being a member of California Saga, a vocal group consisting of second generation Wilsons, Loves and Jardines. The group opened for The Beach Boys 50th Anniversary Tour at The Hollywood Bowl, Irvine, CA and Lake Tahoe, NV. The group also did a special performance for The Grammy Museum in Los Angeles on July 10, 2012.

Billy was a prolific recording artist, releasing a series of albums in the late 90s and 2000s as both a solo artist and a member of the newly reconstituted Ricci, Desi & Billy, with Desi and Billy playing new tunes and old hits with Ricci Martin, Dean Paul’s younger brother. And in 2020 he created a very successful weekly television series, Live from Billy’s Place, featuring songs and stories about musicians he knew and worked with. Because Billy knew… and worked… with everyone.

Billy enjoyed success as a songwriter and his compositions have been recorded not only by Dino, Desi & Billy but by Dean Martin, Nelson Riddle and Beach Boy Carl Wilson. His songwriting credits include the TV series theme song “Automan” (1984), as well as a songwriting credit on the I Love Lucy 50th Anniversary Television Special of 2002 for “Patria,” featuring multi-Grammy Award winner Arturo Sandoval on accompanying trumpet. He co-wrote “Lady Love” with Brian Wilson, “Away” with Dennis Wilson" and “Let's Build a World” with Carl Wilson. He co-wrote “(Because) It's Christmastime” with Rock & Roll Hall of Fame/Songwriter Hall of Fame inductee Robert Lamm, founding member of the group Chicago. The song was the first track of the 2019 Chicago Christmas album on Rhino Records. The album debuted at #1 on the 2019 Billboard Holiday chart.

Billy’s other credits include singing background vocals on the original recordings of Elton John's “Don't Let the Sun Go Down on Me,” The Beach Boys' “Heroes & Villains,” Warren Zevon's “Desperados Under the Eaves” (produced by Jackson Browne), America's “Hat Trick,” Joan Jett's “Good Music” and many more. He was a gifted composer, a talented arranger and a musician’s musician.

In 2002 he produced The Whisky A Go-Go's 35th Anniversary show on the famed Sunset Strip. In recent years he also returned to his original field of study, producing and directing a number of successful music documentaries including Dennis Wilson Forever, 1974 – On the Road with The Beach Boys and Carl Wilson – Here and Now.

Billy was both a serious movie & music buff with an encyclopedic memory. He loved good jokes and bad puns, particularly the latter. Being a foodie, it was pastrami on rye from Art’s Deli. Having a great sense of personal style, he more often then not dressed to the nines… hip, elegant, classy. He could turn on the showbiz charm like nobody’s business. He took great pleasure in calling up friends-excited to talk about a new movie he’d seen, a song he’d heard, a great quote he wanted to borrow, or a very bad joke. He told incredibly entertaining stories, most of which he had lived. He was a legendary raconteur with an extraordinarily generous heart.

Billy maintained a close lifelong friendship with the Wilson family. He had great respect for Murry Wilson, who persuaded his son Brian to co-write a song for Dino, Desi & Billy. He always felt privileged to work with Brian, who he held in awe. He loved his many adventures with Dennis, who he described as the guy who would always dare you to do something you wanted to do but were scared to try. Carl Wilson was his dear friend, collaborator, mentor, as well as brother-in-law. After Carl’s death from cancer in 1998, Billy produced several events for and served on the Board of the Carl Wilson Foundation (CWF), devoted to cancer research and improving the quality of life for those afflicted with this disease.

In 1998, Billy and Desi Arnaz, Jr. reunited to record a tribute to their bandmate Dean Paul Martin, who died tragically in 1987 while flying for the National Guard. The song, “My Old Friend,” includes these lyrics, written by Desi. They seem so fitting in light of Billy’s sudden passing:

In lieu of flowers, memorial donations may be made to: