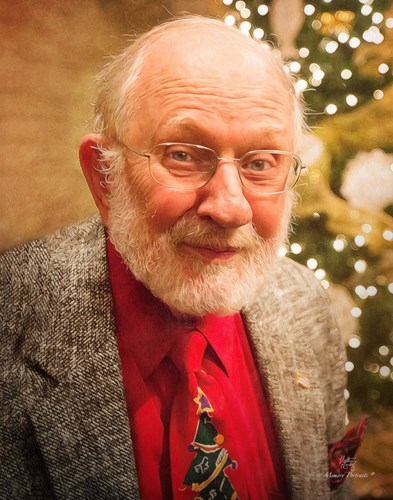 Bobby Edward Campbell of Louisville, passed away on Saturday, November 14, 2020 at his home. Bobby was a Navy Veteran serving during WWII from 1944-1946 on the USS Lumen. He graduated from University of Louisville, attended University of Tennessee, University Of Alabama and IU Bloomington. While attending UT, he worked for Tennessee Valley Authority. When he returned to Louisville, he worked for the VA. He then worked at the British American Tabacco Co., and later was a Louisville Civil Service Examiner. His greatest achievement was working as a professor of Criminal Justice at U of L and helped establish the Southern Police Institute during his 40 years until retirement. During his 78 years as a musician, he performed with the Kosair Shrine Band, The Holy Name Band, the Highland Baptist Orchestra and numerous other bands. He was a charter member of Lambda Chi Alpha fraternity at U of L. Bob was preceded in death by his wife of 45 years, Barbara Campbell; a son, Leigh Edward Campbell and a daughter, Virginia Lynn Keller. He is survived by his three daughters, Denise Hendrick (Jay), Laura Hamilton, Leann Gritton (Jack); 6 grandchildren and 6 great -grandchildren. Guests are invited to attend a visitation from 3-8 pm on Tuesday, November 17, 2020 and from 1-8 pm on Wednesday, November 18, 2020 at Arch L. Heady & Son at Westport Village, 7410 Westport Rd., Louisville, KY 40222. A funeral Service will be held at 11am on Thursday, November 19, 2020 at the Episcopal Church of the Advent, 901 Baxter Ave, Louisville KY 40204, where he was a member for 55 years. Expressions of sympathy may be made to Episcopal Church of the Advent, Kosair Charities or Southern Police Institute.
VOIR PLUS VOIR MOINS