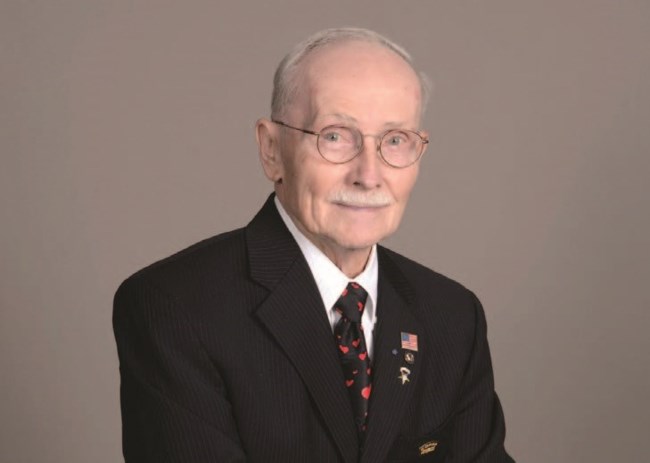 William E. (Bill) Goffinet, 90, of Louisville passed away at 12:40am on Wednesday, July 20, 2022, at Norton Audubon Hospital. He was born on November 12, 1931, in Louisville. KY to the late Sylvan C. Sr. and Hettie A. (Davison) Goffinet. He married Carol A. Kleinjohn on September 14, 1957, in Louisville. She preceded him in death on January 22, 1989. Survivors include his nephews Gary (Leigh Denton) Goffinet of Peoria Heights, IL and Scott (Kimberly) Goffinet of Chassell, MI; niece Tanya (Ray Jr.) Bowens of Louisville; great nephews and nieces: Chad, Sean, Samantha, Conrad and Carson Goffinet; Kristina Weekly; Teisha Wright; and Ray Bowens III; 12 great great nieces and nephews; and 2 great great great nephews. Also surviving is his sister-in-law, USA and international traveling companion and best friend, Lynn Goffinet of Germantown Hills, IL. Besides his wife and parents, Bill was also preceded in death by his brother, Sylvan C. Goffinet, Jr.; sister-in-law, Betty Lou Kleinjohn; and stepfather, Leonard A. Hines. Bill graduated from duPont Manual High School. He served in the US Army in Korea during the conflict and remained in the Army Reserves until 1960. A highlight of Bill’s later years was the privilege of taking an Honor Flight to Washington, D.C. in 2017. He was a very proud veteran. Bill first worked as a carpenter in construction and then was employed in engineering at Methodist Evangelical Hospital for nearly 35 years retiring in November of 1994. As a long time active member of Immanuel United Church of Christ, Bill served his church in many capacities, especially as a counter of the weekly offering for over 30 years and taking professional-quality photos of church events for decades. He was an accomplished photographer and a member of the Photo Forum Camera Club in Louisville. Bill was a 68-year member of the Masons and a member of the Scottish Rite and Shriners. He was also a member of the Order of the Eastern Star where he was active up to the time of his passing. Visitation will be held at Arch L. Heady Resthaven Funeral Home from 4 to 7 pm on Monday, August 1, 2022. The funeral service officiated by Pastor Rachel Small Stokes will be at 1:30 pm on Tuesday, August 2 at Immanuel United Church of Christ, 2300 Taylorsville Road, Louisville, KY 40205. Burial will follow in Resthaven Memorial Cemetery. After the burial family and friends are invited to a reception at Resthaven Funeral Home to honor Bill’s final wish and share memories. In lieu of flowers, memorial contributions may be made to Immanuel United Church of Christ.
VOIR PLUS VOIR MOINS