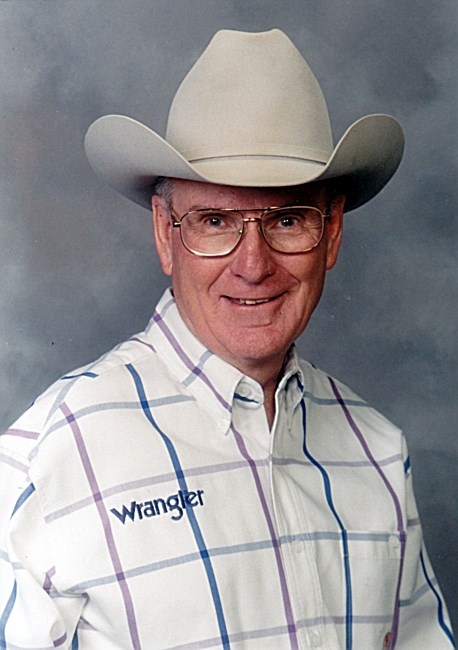 Alvin Glen Davis passed away June 22, 2022, he was 94 Years old. Alvin was born to Glenn M. Davis and Viva (Cowdrey) Davis on November 12, 1927 at home in the Graham Chapel Community southwest of Post, Texas. He graduated from Post High School in May of 1944 and attended Texas A&M for one semester. When he turned 18, he joined the Army and was honorably discharged at the end of his enlistment at 19 having attained the rank of Sergeant. In 1947 he enrolled at Texas Tech and graduated with a BS in Agriculture in 1951. On July 28, 1955 he married Barbara Ann Hext of Apache Creek, New Mexico. In 1948 Alvin was named the Top 4-H Boy in the U.S. as the winner of the National 4-H Leadership Award. That same year he founded the Southwestern Championship Junior Rodeo at Post, Texas. In 1950 he was elected President of the Texas Tech Rodeo Association. In 1952 Alvin founded The American Junior Rodeo Association and served as its Secretary-Manager for 6 years. In 1955 he became the first Secretary-Manager of the National Intercollegiate Rodeo Association. In 1984 he was named Outstanding Citizen in Terry County and in 1984 he was selected to be the first inductee into the Texas Tech Rodeo Hall of Fame. He was presented with the Texas Tech Ex-Students Association Distinguished Service Award in 1990. Alvin was inducted into the Buddy Holly Walk of Fame in 2003, named an Honorary Masker Rider in 2004 and inducted into the Texas Rodeo Cowboy Hall of Fame in 2009. Alvin worked at Brownfield State Bank from 1952 through 1964 and the First National Bank Clovis from 1964 to 1965. From 1959 through 1979 he was Owner/Co-owner Manager of the Cowboy Stores in Post, Levelland and Brownfield. In 1981 he joined the Ranching Heritage Center at Texas Tech and was the Executive Vice President and General Manager until his retirement in 1993. From 1994 through 2015 Alvin devoted his time to the National Cowboy Symposium and Celebration held annually in Lubbock. Alvin dedicated his entire life to preserving and promoting Western Heritage and Cowboy Culture. Over his lifetime Alvin was an active member of the Church of Christ and served as an Elder in several of the congregations he attended. Alvin is survived by his wife of 66 years Barbara (Hext), his children Bob Davis and his wife Lee, Debbie (Davis) Garland and her husband Mike, Todd Davis and his wife Lena, his grandchildren Travis Garland and his wife Erika, Taylor (Garland) Neal and her husband David, Cameron Davis, Annie Davis and his great granddaughters Avery Neal and Emily Neal. Visitation for Alvin will be held on Tuesday, June 28th from 6 – 8 PM at Resthaven Funeral Home in Lubbock. Funeral Services will be held at Sunset Church of Christ in Lubbock on Wednesday, June 29th at 10 AM. In lieu of flowers, please make contributions to: The Alvin G. & Barbara A. Davis Rodeo Endowed Scholarship Texas Tech University Davis College P.O. Box 42123 Lubbock, Texas 79409-2123
VOIR PLUS VOIR MOINS