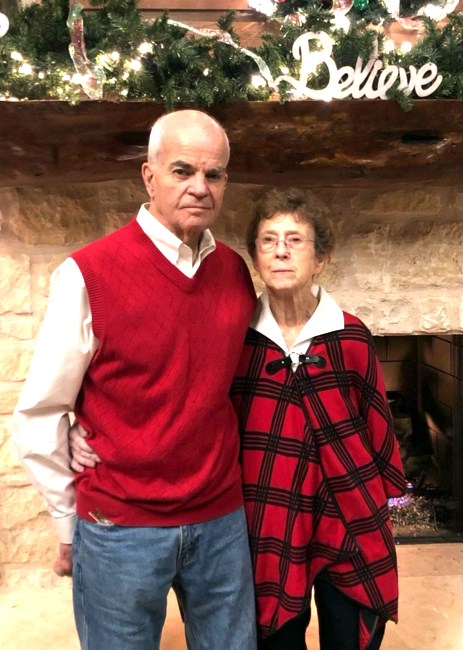 With heavy hearts, we share that Carolyn Edwards passed away on July 29th, and a day later, after losing his beloved wife of 63 years, Jerald (Jerry) Edwards joined her in a heavenly celebration on July 30th. Both died peacefully at home. Carolyn Sue Edwards was born on October 17, 1937, in Sasakwa, Oklahoma, to Frank and Euda Raley. The Raley’s made their home in Kermit, Texas where she spent many hours with her brother Bud enjoying the many activities around the sand dunes where they lived. Carolyn enjoyed her school days in Kermit and participated in many activities, including theater. She enrolled in West Texas State University in to study education. Jerald (Jerry) Edwards was born on September 4, 1938, in Lubbock, Texas, to J. B. and Marjorie Edwards. The Edwards family made their home for Jerry and his sister Chris in Dumas, Texas, where Jerry participated in many sporting activities, including high school football, basketball, and track. Jerry headed south to West Texas State University as well, and during his freshman year, an upperclassman instructed him to put on his “beanie” during a train ride to a football game. Even after this “instruction,” they quickly became best friends and were married on January 22, 1959. After receiving their degrees, they began teaching careers in Midland/Odessa while starting their family. Jerry and Carolyn didn’t stay in west Texas long and made their way to Marble Falls in 1968 with their two sons, Russ and Rick. Carolyn taught elementary school for over 40 years, teaching first and third grade at Marble Falls Elementary School. Jerry served as a regional sales manager for W.B. Saunders Company and later served as Associate Executive Director for the Texas Association of School Boards. In 1990 Jerry started his risk management firm, Edwards Risk Management, serving Texas public entities in Texas and Arizona. Living in Marble Falls brought the opportunity to begin their life-long passion, waterskiing. For many years the family enjoyed the lake, and soon the boys were competitively waterskiing at tournaments around the nation while Jerry began judging and coaching. Jerry and Carolyn traveled the world as he served as coach of the USA national waterski team during numerous world championships. Carolyn was always beside him getting to know the participants from all the other nations. If Jerry and Carolyn were not on the water, they often would be found wearing purple and supporting their Marble Falls Mustangs. They supported all athletics and enjoyed watching their grandsons’ basketball, tennis, and soccer games. They continued to serve the Mustang community as Jerry served on the school board for almost 15 years. If the district needed any support, Jerry and Carolyn were there to assist. It has been said that they blessed so many it would be like counting sand. Jerry and Carolyn were Christians who walked with Jesus. They were members of the First Baptist Church for many years and later were among the founding members of Fellowship Baptist Church. Jerry served as a Deacon, and Carolyn taught Sunday school. Jerry and Carolyn cherished their time with family and friends at their lake home or going to Colorado to snow ski and fish. They set an excellent example through their faith, life, and love. They were preceded in death by their son Rick, their parents, and Carolyn’s brother, Bud Raley. They are survived by their son Russ Edwards (Barbara); Rick’s wife, Kim Edwards; Chris Goddard (Vance); Bud’s wife, Patty Raley; grandchildren Tucker Edwards (Jennifer), Jordan Edwards (Mary), Collin Edwards (fiancé Shauni), and Jared Edwards; great-grandchildren Daniel, Henry, Rose, George, Tommy, Vivian, Joseph, and Maura Edwards; many nephews, nieces, and their friend Angie Hucey. In lieu of flowers, the family requests that memorial donations in their name be made to the Marble Falls Education Foundation, Fellowship Baptist Church, the Michael J Fox Foundation for Parkinson’s Research, or St. Fredrick's Baptist Church - Marble Falls Meals Program. Services will be held at 2:00 p.m. Saturday, August 6, 2022, at Fellowship Baptist Church, 2702 Mormon Mill Rd, Marble Falls, 78654. The service will be streamed live at http://fmf.life/home
VOIR PLUS VOIR MOINS