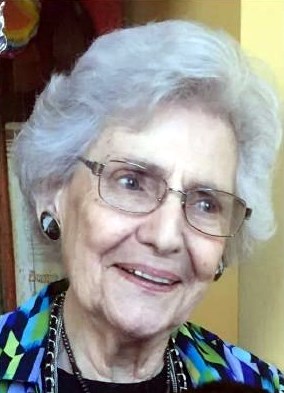 Hilda was born January 25, 1926 in Merced, California to Antone and Gertrude Hoffknecht. She grew up on a farm outside of Merced. She attended a one-room schoolhouse named El Capitan where she graduated in 1939. She then attended Merced High School until 1943. After graduating from San Jose State University she taught school for 15 years, mostly at Franklin Elementary. Hilda met the love of her life, Rex Freeman, while square dancing. They married June 21, 1959. She continued teaching after their daughters Margaret and Laurie were born, but became a stay at home mom after the birth of their son Sam. She was dedicated to providing enriching activities for her children. Together with Rex and the family, she enjoyed camping trips and attending classic car shows all over California. She and Rex also traveled to Germany where she met many of her relatives and saw the town where her parents were born. They also enjoyed several cruises and traveled back East to see Colonial America. Hilda was a member of many groups during her long life; Campfire Girls, PTA, Merced Music Guild, Symphony League, AARP, Valley Vintage Car Club, and the Merced Women’s Club, to name a few. She was preceded in death by her parents, her brothers, Antone, Joseph and his wife Lucille, William and his wife Mary, her sister Theresa, her beloved husband for 62 years, Rex Freeman, her step-son and step-daughter, Jay and Donna Freeman, and many nieces and nephews. On May 11th Hilda left behind her sister Ruth Herdman, daughters Margaret Sanchez and Laurie Banks and Laurie’s husband Jeff, son Sam Freeman, grandchildren Renata Sanchez, Alycia Sanchez, David Sanchez, Rex Freeman, and Francesca Freeman, Erin Lopes and great-grandsons Lucas Feri and Dylan Feri. She was greatly loved. She will be greatly missed. A visitation will be held at Stratford Evans Funeral Home, 1490 B St., Merced on May 31st from 4-6 p.m. followed by a rosary. Her funeral service will be held June 1st at 12:00 p.m. at Stratford Evans followed by interment at Calvary Cemetery and a reception at Stratford Evans. In lieu of flowers Hilda requested donations be made to the American Heart Association, Catholic Charities, or the Merced Historical Society. Fond memories and expressions of sympathy may be shared at www.stratfordevansfunerals.com for the Freeman family.
VOIR PLUS VOIR MOINS