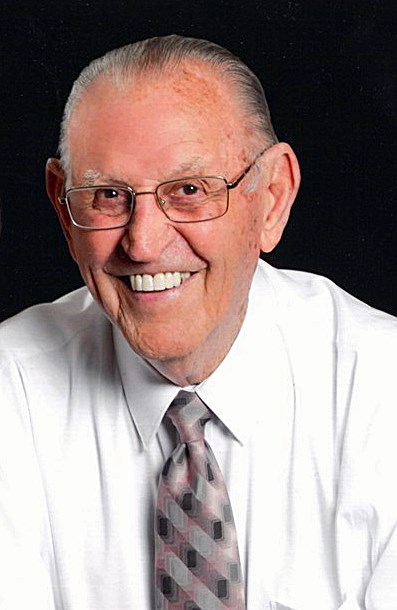 Jesse Robert “Bob” Ball, passed away on November 17th, 2021. He was the husband of his loving wife, Donnie Ball. They shared 68 wonderful years of marriage together.

Born February 3rd, 1929 in Oklahoma City, he was the son of Virgil R. Ball and Bessie Pink Skinner Ball. He attended school at Wilson Grade School, Harding Jr. High, and Classen High School in Oklahoma City and graduated high school from New Mexico Military Institute in 1946. He graduated junior college in 1949 from New Mexico Military Institute. He went to the University of Oklahoma for a few years and then was drafted into the Army. He went to Officers Candidate School and became a First Lieutenant in the Army, 82nd Air Borne Division Artillery in Fort Bragg, NC, serving from 1950-1953, and then joined the Army reserves for several years. He met Donnie, the love of his life, on a blind date in 1953, and they got married later that year at Fort Bragg, NC.

He earned a Bachelor of Science in Engineering Physics from the University of Oklahoma in May of 1959 and became a Licensed Professional Engineer in May of 1966.

Bob started his career with Convair in Ft. Worth TX, working in the Aircraft Nuclear Propulsion program, flying the first nuclear powered airplane. In 1957 he went to work for the FAA, retiring with them in 1981 as Supervisor of the Aerospace Engineer, small aircraft certification, flight standards national field office in Oklahoma City. He worked as a Petroleum Landman for a time, before going back to work for the FAA in Kansas City as the manager of the project support office, small airplane directorate, retiring again in 1991. He then continued to teach small aircraft certification for several years, enjoying numerous trips around the world with Donnie.

He was a founding member and faithful servant of St. Andrews United Methodist Church in South Oklahoma City. He truly loved his church family. He loved working with Boy Scout Troop 91 having served as Scoutmaster, coached little league baseball, coached girls’ softball and served on the Methodist Camps Board for several years. He loved attending college football games in the fall, especially his beloved Sooners.

He is remembered for his loving, caring, and adventurous spirit. He loved his family dearly, and he loved spending time with Donnie most of all.

He is survived by his wife Donnie Ball of the home, his children, Teena and her husband Mark Hollingshead of Oklahoma City, Jay Ball of Washington DC, and Chris and his wife Linda Ball of Pryor, grandchildren Eric Hollingshead, Carey Hollingshead both of Oklahoma City, Julie and her husband Brock Crawford of Owasso, and Wesley and his wife Tessa Ball of Pryor. He has five wonderful great-grandchildren, Ryan, Rhett, Lily, Alice and Maxine.

Visitation will be 12pm-8pm on Monday, November 22, 2021 at Advantage Funeral Service with family to greet guests from 5pm-7pm.

A service to celebrate his life will be 10am, Tuesday, November 23, 2021 at St. Andrews United Methodist Church, 2727 SW 119th St, OKC, with burial to follow at Resthaven Memory Gardens in Oklahoma City.