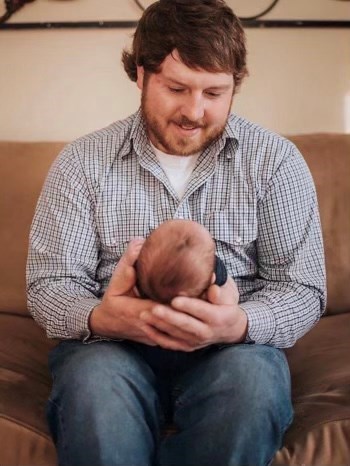 Cody Lee Holden, 35, went home to be with the Lord on Sunday, August 7, 2022. He was born on April 9, 1987 to Ron and Kathy Holden in Memphis, TN. Cody was an avid outdoorsman. He loved fishing, hunting, and shooting skeet. Cody was a devoted father and loved teaching his son about the outdoors. He never missed an event and would always cheer him on from the sidelines. Cody was a skilled carpenter and built his own designs when he was not in the field working. His grandfathers, Kenneth “Gene” Eugene Huckabee, Jim Ed Holden and his cousin, Chelsey Charnes, preceded him in death. Cody leaves behind the love of his life and mother to his child, Amber Visser; a son, Wyatt Holden; his parents, Kathy and Ron Holden; a sister, Hannah Holden Owens (Justin); a brother, Hunter Holden (Jessica); his grandmothers, Glenda Holden and Barbara Huckabee; mother and father in law, Angela and Terry Visser, and his sister in law, Mary Haynes. He also leaves behind four nephews: Peyton, Paxton, Sam and Noah; two nieces, Zoey and Paisley, and a host of: aunts, uncles, cousins, and extended family. A visitation for Cody will be held Thursday, August 11, 2022 from 5:00 PM to 8:00 PM at Brantley Funeral Home, 6875 Cockrum Street, Olive Branch, MS 38654. A funeral service will be held on Friday, August 12, 2022 from 2:00 PM to 3:00 PM at Brantley Funeral Home. In lieu of flowers the family request that memorials be directed to an account that has been set up at Trustmark Bank in benefit of Cody’s son, Wyatt Reid Holden (please put his full name in the memo section of your check). When remembering Cody always remember his favorite quote, “I don’t go fishing to escape my life. I go fishing to live my life.”
VOIR PLUS VOIR MOINS