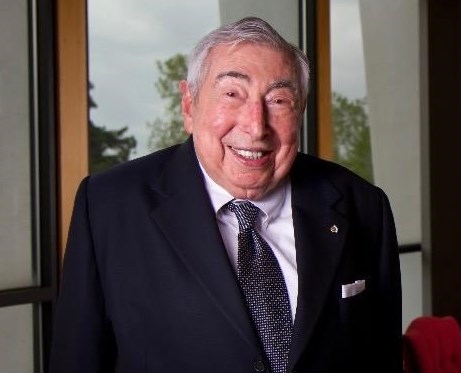 Sidney Guller passed away peacefully at home October 3rd, 2020, surrounded by his family. He lived a rich and meaningful life, and he was a month shy of 97 years old. Sidney was devoted to his loving family, his company Essex Industries, his fraternity Sigma Alpha Mu, his school Washington University in St. Louis, and the various organizations and boards he served. However, the true love of his life was his wife Bobbi; everything rose and set with her. A bachelor and "fun uncle" until his early fifties, Sidney married Bobbi, and just by saying “I Do”, he was blessed with an immediate family of his own. Bobbi’s daughters Deni, Jody, Nanci, and Robyn were his girls and he was their Dad. Sidney was so incredibly proud of his family: his daughters, grandchildren, and great-grandchildren. Sidney was dedicated to serving his community. Informed by his Jewish faith and values, he found great joy in helping others through organizations such as the Jewish Federation, Jewish Community Center, Jewish Food Pantry, Muscular Dystrophy Association, and ALS Association, and his impact was felt deeply by many. Sidney received a BA in Business Administration from Washington University School of Business. As an alum, he was a longtime supporter of the Olin Business School and its students. His legacy there will continue with the Bobbi and Sidney Guller classroom and the Guller Scholarships. He was a proud member of the Sigma Alpha Mu fraternity, served as President of the national fraternity, and attended 70 national conventions, the most by any member. A perfect gift for Sidney was always a tie or sweater in “Sammy” colors, purple and white. Sidney loved his Essex family as well. He and his brother Harold Guller built Essex Industries 73 years ago and he remained involved as the Chairman of the Board, continuing to come into the office until the COVID-19 shutdown in early 2020. Sidney was admired by all who knew him for his honesty, humbleness, humor, and generosity. He lived a rich life, and his loss is felt profoundly. Sidney is the beloved husband of the late Bobette “Bobbi” Guller; dear father and father-in-law of Deni Kronenberg (Joel), Jody Waldman (Mickey), Nanci Seigel Manson (Roy), and Robyn Levy-Marino (Mark Miller); dear grandfather of Evan Waldman (Kami), Todd Waldman (Diana), Corey Waldman (Rachel), Bryan Siegel, Erika Isard (Phillip), Jordan Santo, Emily Marino, Samantha Manson, and Jacqui Manson; dear great-grandfather of Landon Waldman, Parker Waldman, Sawyer Waldman, Logan Waldman, Grace Waldman, Teddy Waldman, and Jackson Waldman; dear brother of the late Harold Guller (the late Millie), the late Annita Suffian (the late Fred), the late Harvey Guller (Phyllis), Maurice (Rachel) Guller and the late Arthur (Lois) Guller; dear brother-in-law of Judi Elman (Bob) and Bette Fox (Richard Lyss); dear son of the late Louis and the late Fannie Guller; dear uncle, great-uncle, cousin, and friend to so many. Sidney’s funeral service will take place on Tuesday, October 6th at 2 p.m CDT. Personal attendance is limited to protect the health and safety of others; however, the service will be Live Streamed for all who wish to join. Please visit https://boxcast.tv/view/funeral-for-sidney-guller-247886 at 2 p.m. CDT to view the service. Memorial contributions preferred to The ALS Association, St. Louis Regional Chapter; Sigma Alpha Mu Foundation’s Bobbi and Sidney Guller Leadership Development Fund; or the Harvey Kornblum Jewish Food Pantry.
VOIR PLUS VOIR MOINS