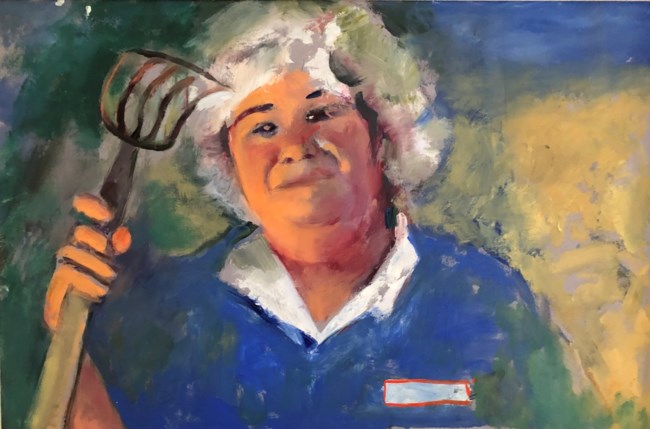 Rosemarie Antoinette Basile, a longtime Provincetown resident and celebrated artist of local scenes, died peacefully on September 25, 2022 at her home in Orleans. Rose was born on May 10, 1931 in Newark, N.J., the only child of Aurelio Artillio and Immaculata (Spallone) Basile. She spoke only Italian till the age of seven and spent childhood summers on the Jersey shore. There she enjoyed coastal pleasures with her family while amassing skills to become an avid fisher- and shell fisherwoman. Her father encouraged such endeavors, giving her waders and a fly rod for her 21st birthday. A passionate world traveler and ardent gardener, Rose came from a family of artists. Her paternal grandmother was a sculptor in Italy; her father dabbled in paint; maternal aunts adorned kitchen walls with painted murals of the Bay of Naples, Sorrento, and Capri; and a cousin painted designs for fabrics. She went to high school at St. Mary’s Academy in Hudson, N.Y., attained a bachelor of science degree at Sargent College at Boston University, returning later to obtain a master’s in education and psychology. She taught in the Newton Public Schools and at Rhode Island College before retiring in her early 40s. In 1975, Rose moved to Chatham, before settling in Provincetown 20 years later. Following watercolor classes at the Boston Museum School and elsewhere, she began a serious pursuit of painting. Drawn to depicting landscapes and waterfronts, Rose’s brilliant yellow hip boots and orange hoodies — as well as her gulls and dunes against vibrant blue seas and skies — heralded her place as a colorist within Provincetown’s rich tradition. As David Cowan, her gallerist at ACME Fine Art in Boston, once said, her “strikingly original work chronicles the lives of fishermen and women and their contemporary struggle for economic survival on the Outer Cape.” Rose’s artworks graced the covers of several local publications, and she was honored with a solo exhibition in 2004 at the Provincetown Art Association and Museum (PAAM), where she had served on the board of trustees. There were also solo exhibitions of her work at Berta Walker Gallery in Provincetown, where she was represented, and Bert Gallery in Providence, R.I. Julie Heller Gallery in Provincetown also represented her for many years. Rose’s work resides in the permanent collections of PAAM, the Cape Museum of Fine Arts, and the Provincetown Public Library. In a fitting finish to Rose’s career, her painting Blessing of the Fleet is included in “Selections From the Provincetown Art Colony,” a PAAM exhibition which currently hangs in the West Wing of the White House through June 2023. Rose leaves behind many beloved friends, including Carol Noyes. There will be no services. Condolences may be offered at the Nickerson Funeral Home website. Memorial donations may be made in Rose Basile’s name either to Provincetown Art Association and Museum, 460 Commercial St., Provincetown 02657, or to Friends of the Provincetown Public Library, P.O. Box 207, Provincetown 02657.
VOIR PLUS VOIR MOINS