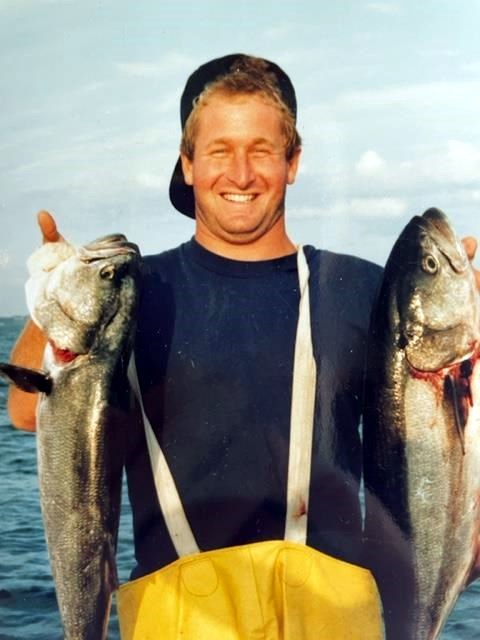 Todd Fraser Eadie, of Hudson and Brewster, Massachusetts, died May 8, 2022 at the age of 61. He leaves behind his wife, Karen, his treasured daughters Alison and Lauren, brother James Eadie and his wife Barbara, sister Elizabeth Booth, as well as his nieces Sarah and Emily and nephews Chris and Finlay. He was predeceased by his parents, James “Peter” Eadie and Nancy Barrett Eadie. Todd will always be remembered by his many lifelong friends, fellow police officers, ASD fraternity brothers, fishing buddies, and by his cat, Tuukka. Todd was born May 24, 1960 in Concord, Massachusetts and lived there and in Dallas before moving to Sudbury, MA. He graduated from Lincoln Sudbury High School and later attended Hebron Academy, American International College, and the New Hampshire Police Academy. Todd began his long career as a public servant with the Litchfield, NH Police Department. He then returned to his hometown, serving on the Sudbury Police Department for 32 years until his retirement as a Sergeant in 2017. Todd was a recipient of the George L. Hanna Award for Bravery from the Commonwealth in 1988, the highest medal a Massachusetts law enforcement officer can receive. Todd’s big personality was hard to miss and will be missed by many. At any gathering, he was the one with the most mischievous grin, the loudest voice, the fullest plate, and the funniest remarks – often at his own expense. He was most happy when grilling the catch of the day, steering his John Deere with one hand and holding a beverage in the other, yelling at the TV while watching the Bruins, laughing at an old Three Stooges skit as if he was seeing it for the first time, spooling line and making fishing jigs, or testing the limits of his frat house speakers. Todd loved to be outdoors tending to his lawn, splitting wood, or setting his “burn pile” ablaze. He played ice hockey from childhood through his adult years, and enjoyed those days in the net and on the ice with lifelong friends. His passion was fishing in the waters off Cape Cod, on his own boat or as a crewmember on a commercial vessel or charter. For many years, he caught and sold fish to restaurants on and off Cape. Bluefish, codfish, bass, tuna, squid … he knew where to find them and how to land them in the boat. He loved to invite friends along on day trips, sharing his knowledge and skills, but rarely sharing the coordinates for his “secret spots.” Todd was known by many monikers, as he liked to call them…The Master of Disaster, Doinker, Todd Manchu, The Dude, Analog Todd, No Filter, All-or-Nothing Eadie...but the thing he liked to be called, more than anything else, was Dad. His daughters were, by far, the joy of his life. He was so proud of them and loved to brag about them to anyone who would listen. He protected them, provided for them, and always made sure they were “aware of their surroundings.” Whether fishing together on the boat, sitting on the sidelines at a soccer game, applauding from the audience, sharing advice and “Oh, dad” moments, or tormenting boyfriends, he loved them with all of his heart and will always be watching over them. Todd, you lived large and loved large, and will be greatly missed by those who loved you back. May you have tight lines, bent rods, green grass, high tides and a Blue Sky forever. XXOO Services will be private.
VOIR PLUS VOIR MOINS